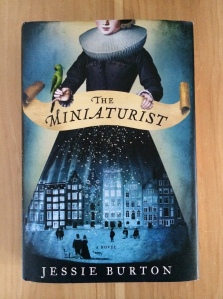 Jessie Burton’s The Miniaturist* begins with the well-attended funeral of a person with no friends, and that’s just the beginning of its many mysteries.

Months before this funeral, Petronella Oortman steps up, alone, to the door of her new husband’s house. Johannes Brandt is not home — a state of affairs that’s nearly normal, as she comes to learn — and she faces the household servants and her new sister-in-law on her own. Like the second Mrs. DeWinter in Daphne du Maurier’s Rebecca, Nella is young, inexperienced, and unaccustomed to great wealth. And like Mrs. Danvers, Nella’s sister-in-law Marin knows weakness when she sees it.

Amsterdam is prosperous, pious, and deeply committed to maintaining the appearance of both. Johannes is a highly successful merchant, but success has its perils, of course. He keeps Nella at a distance, though she does manage to glean a little information about his professional life. It’s when he gives her a wedding gift — a cabinet intricately designed as a replica of their house — that the narrative takes off. It is an unusual and expensive gift on its own, but Johannes also gives Nella carte blanche to “furnish” the house as she likes.

As Nella settles into her new life, she attempts to unravel the secrets all around her — the miniaturist’s, her husband’s, Marin’s — and finds some unraveled for her without any trying. And not one of those secrets is safe.

Ms. Burton’s painterly writing brings late-seventeenth-century Amsterdam to blooming life. The sensory detail of the novel is remarkable (a dog “moves like spilled liquid, masterless, a chess piece rolling out of place” [115]), almost calculated to outshine the still-lifes we know from museums that hang in the Brandts’ home.

The pace of revelation is excellent, the characters are interesting (I do love fascinating, unlikeable women like Marin). I liked the novel’s unflinching gaze at its own unpleasant events, too. My quibble is with the ending; part of it was too neatly tied off, and part of it felt withheld, in an unsatisfying way. Given the whole of the book, however, this a minor critique, and shouldn’t stop you from picking up The Miniaturist.