Recently I reviewed Celeste Ng’s luminous debut novel, Everything I Never Told You.
Ms. Ng graciously agreed to be interviewed via email.

How would you describe the inception of Everything I Never Told You? What was the writing process like? 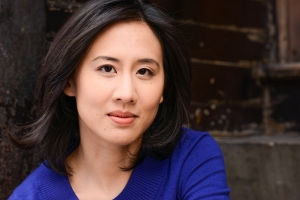 CN: For me, stories almost always start with images. In this case, my husband happened to tell me that when he was a kid, he was at a friend’s house when his friend pushed his own little sister into a lake. When my husband told it, it was a funny anecdote—his parents had to come pick him up early, because wow, was his friend in trouble—but for some reason that image of a girl falling into water stuck with me. I am a terrible swimmer myself, so maybe my fear of water had something to do with it. It transformed into something quite different—in the novel, Lydia is a teenager, for one, and it’s not clear how she ended up in the water. But that was the seed that started the story.

I began the novel when I was completing my MFA at the University of Michigan, in the spring of 2006, and I wrote 4 drafts before finishing the book in 2012. So it was a long process, with a lot of changes in between: I finished school, I moved, I had a baby. I like to think that long gestation made for a better novel. 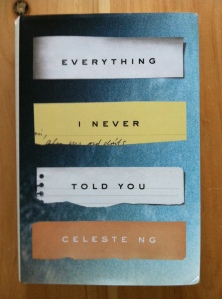 CN: As I got to know these characters, I realized that the 1970s was a time that highlighted all of the struggles they faced. Interracial marriages have become more common now, but in the 1970s—to say nothing of the decades earlier—Marilyn and James would really have turned heads. Asians weren’t as much of a presence yet, either. And Marilyn’s dream of becoming a doctor was much more poignant in that time period—she would have been in college in the 1950s, when medicine would have been a hard path for a woman. It made my heart ache to know her daughter could have that opportunity, but that Marilyn never really would.

I also found that the 1970s allowed a bigger sense of mystery. We have a lot of ways of finding and knowing people now—we can track them by the GPS in their cell phones, or we can look at their browser history and see what websites they were looking at, or check what they posted on Twitter or Facebook for insight into their thoughts. But in the 1970s, of course, there were no cell phones, no internet, no social media. I wanted Lydia’s family to have to face that information void, to have to face a lot of unanswered questions about her life.

The structure of the novel modulates (seemingly) effortlessly between the past and present, between children and parents. How did you arrive at this structure?

CN: The structure took a lot of work. As I said earlier, I went through four drafts of this novel, and every one of them had a major structural change. I tried telling the story in parts—a few chapters when Lydia’s body is discovered, then a few chapters of Marilyn’s past, then a few chapters of James’s—but that broke up the momentum. I tried braiding the different timelines together, but it got confusing. I tried a lot of things! I ended up having to change the viewpoint as well as the structure, using an omniscient narrator to help make connections between past and present. The story itself stayed relatively constant throughout; it just took a long time to figure out how best to tell that story.

Much of the conflict in Everything I Never Told You involves longstanding miscommunication and misperceptions. What’s something you hope readers take from the novel back to their own lives?

CN: I hope readers will finish the book thinking about the ways they might misunderstand people close to them, and about the assumptions they might be making about others. We assume so much, all the time—we fill in a lot of gaps in conversation and relationships. We draw a lot of inferences about what it means when someone calls you or doesn’t, when someone gives you something or doesn’t, when someone comes to your birthday party or your brother’s funeral or your dance recital, or doesn’t. But we don’t always interpret those gestures and words correctly. It’s hard to say to someone, “Wait, what do you actually mean by that?” A lot of times it’s easier to hear things the way you want to hear them than to ask questions and listen.

On your website, you write that you grew up in a family of scientists. How did that influence your writing? When did you first think of becoming a writer?

CN: I always wanted to be a writer, but didn’t think it was an actual job you could do. So I spent most of my childhood and adolescence planning to write “on the side” while I held another job: paleontologist, astronaut, journalist, book editor. By the time I finished college, I was planning to get a Ph.D. in English, teach college literature, and write on the side, when a mentor suggested I think about an MFA instead. I had no idea such a thing even existed. And it wasn’t until years after I finished the MFA that I started thinking writing could be something I could do professionally.

I actually think that growing up in a family of scientists helped me become a better writer.  From my family, I learned a particular scientific mindset: to look closely at things that puzzle you, to find anomalies more revealing than the norms, to think about cause and effect.  Most important, I think science taught me to believe that there is a logic and a system to the universe, and that—if you try hard enough, and look closely enough—you can illuminate at least a small part of it.  All of that feeds into my fiction.  If you look at science in that way, it’s an ideal training ground for a writer.

What’s next on your writing horizon?

CN: I’m working on another novel that’s actually set in our mutual hometown of Shaker Heights, Ohio.  I won’t say too much about it yet, as I’m superstitious about such things. But as you know, Shaker Heights is an interesting place: it’s racially integrated and very well off, yet of course there are still issues of race, class, and culture that affect the city. And it has a lot of quirks, and a real concern with appearance. I always tell people about the garbage collection—how you’re not allowed to bring garbage to the curb, but you have to leave it in the back for the mini garbage-scooters to pick up and ferry to the big garbage truck, so that the front of the street never looks messy.  It’s such a fascinating place, so the new book deals—so far, anyway—with a family living in Shaker, and a mother and daughter who move there from out of town and unintentionally start to shake things up a little bit.

My thanks again to Ms. Ng for her time and thoughtful answers. You can read more about Ms. Ng, and Everything I Never Told You, on Ms. Ng’s website, www.celesteng.com. Follow Celeste Ng on Twitter: @pronounced_ing

Bostonians: You have two opportunities in July to hear Celeste Ng read from Everything I Never Told You!

10 thoughts on “An Interview with Celeste Ng, Author of Everything I Never Told You”