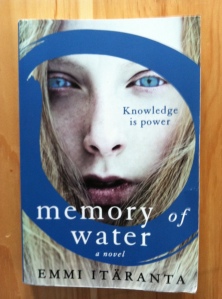 If you’re looking for a thoughtful, surprising dystopian novel that will make you see your preferred summer body of water — ocean, lake, swimming pool — in a whole new light, look no further than Emmi Itäranta’s Memory of Water*.

Ms. Itäranta, who is Finnish and lives in England, wrote the novel in both Finnish and English (the translation of the novel’s Finnish title is The Tea Master’s Book), and readers will find both a Scandinavian setting (albeit much different from today’s region) and lyrical prose, setting Memory of Water apart from what has now become rather standard dystopian fare.

What also sets the novel apart is Ms. Itäranta’s use of conventional dystopian tropes — a world changed after environmental disaster, an authoritarian government wielding violent power, scarcity of basic resources — without following standard plot-lines. Noria Kaito lives in a far-flung village of the Scandinavian Union, which is ruled by New Qian. Her mother is a scientist, and her father is a tea master, performing the traditional tea ceremony that has been handed down for generations; Noria is his apprentice. One day, her father shows her a dangerous secret: a hidden spring that only the tea master’s family knows about. With fresh water scarce — the rest of the village drinks desalinated seawater — this knowledge is illegal, and before long, a commander from New Qian arrives in town, suspecting the tea master’s secret.

When her father dies, Noria becomes the tea master — unprecedented, since she is a woman — and must decide what to do with her knowledge. At the same time, she’s navigating her friendship with Sanja and exploring old technology that they found together in the “plastic grave” near the town, technology that leads the pair to yet another dangerous secret. The military’s hold on the town becomes more brutal, and Noria is faced with extremely difficult choices about what’s best for her, for Sanja, for their village, for the world.

I loved Memory of Water for its musicality, its lyric attention to water, its innate feminism, its conjuring of a world very different from our own, but shaped with its ghostly imprint. I loved Ms. Itäranta’s refusal to grant the reader a happy ending (reaching instead for realism) without diminishing the power of hope. Highly recommended reading.

*I received a copy of this book from the publisher for review purposes, which does not affect the content of my review.