“For Octavius Caesar is Rome; and that, perhaps, is the tragedy of his life.” 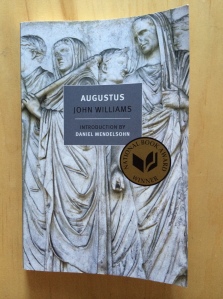 John Williams’s Augustus* is relentlessly brilliant. It is one of the best books I have ever read.

First published in 1972 to widespread acclaim (it won the National Book Award in 1973), and re-released Tuesday by New York Review Books Classics, Augustus is the third of John Williams’s three novels; the second, Stoner, has been receiving a great deal of critical attention lately. We appear to be in the midst of a Williams renaissance, and I’m all for it.

Augustus is an epistolary novel that chronicles the life of its Gaius Octavius, later Gaius Julius Caesar Octavianus (or Octavian, or Octavius Caesar), who became the Roman emperor Augustus. Augustus ushered Rome into an era of peace and prosperity after the death of his uncle, Julius Caesar — but not, as this novel makes clear, without great personal cost.

Readers who pick up the novel might want first to brush up a bit on classical Roman history and personages, or watch two of the most entertaining spectacles on Roman history every produced: the star-studded film epic Cleopatra (1963) and the equally star-studded  BBC tv-series I, Claudius (1976), based on the Robert Graves novel of the same name. Cleopatra, which features Elizabeth Taylor in the title role, is simply fabulous (and eminently quotable); Roddy McDowall’s Octavian is cold, calculating, and very young, a sort of icy wunderkind. We are not meant to like him. The Augustus of I, Claudius (played by Brian Blessed), is a jovial, kindly fellow who just wants peace and quiet and a break from his wife’s schemes. (I, Claudius is rather like HBO programming before HBO: sex, violence, top-notch acting, and great source material. It’s Game of Thrones without the dragons. Also, Patrick Stewart with hair: need I say more?)

Augustus‘s portrayal of the man is completely different, because it is only in the book’s brief and final section that we are able to look directly at him, at the way he sees himself. The first two sections are formed by correspondence, diary excerpts, and other documentation from figures who orbit Augustus. The first section chronicles the young Octavius’s rise to power through political acumen, battlefield victories, and strategic marriages; it is a success story, even though its central figure is by no means a saint. The second section delves into the now-emperor’s personal life, with its many missteps and disappointments, chiefly regarding Augustus’s only daughter, Julia.

In both sections, we see Octavius (or Augustus) in profile, as Williams pieces together a collage of the man from portraits by his friends, enemies, and observers. Julius Caesar, Cicero, Marc Antony, Horace, Virgil, Agrippa, Maecenas, Ovid, Cleopatra, Livia, Julia — they’re all in the book, all vivid characters themselves (it’s particularly wonderful to read how seriously Williams takes the female characters). I’ve never seen the epistolary form used to such perfect effect.

Williams’s technical mastery is overwhelmingly good; style, pacing, plotting, and thematic considerations all balanced. His command of the material is unimpeachable (he does acknowledge poetic license with facts and timelines, as necessary).  Each character is identifiable by his or her style of writing, but Williams never caricatures, never attempts to make a person memorable by inflating his or her worst or best characteristics. Livia plots and schemes, to be sure, but she’s not the arch-villainess of I, Claudius; she’s an ambitious and ruthless person, but still a person.

While much historical fiction recreates lost worlds through sumptuous (and enjoyable) description, Williams brings Rome to life through plain but subtle language, evoking the philosophy and outlook of a culture in transition. And since Rome — as a republic and as an empire — was a model for the founders of America, Augustus suggests many parallels and warnings about our own historical moment. (Look for an absolutely killer final line.)

While it is a novel about a poilitcal figure, Augustus is just as interested in the man: the father, brother, and friend who built an empire. In the novel’s last section, an elderly Augustus writes one last letter to an absent friend, reflecting on his life and the choices he made for the good of Rome. In the end, writes Augustus,

I have come to believe that in the life of every man, late or soon, there is a moment when he knows beyond whatever else he might understand, and whether he can articulate the knowledge or not, the terrifying fact that he is alone, and separate, and that he can be no other than the poor thing that is himself. (293)

Augustus is simply not to be missed. Masterful, elegant, erudite, and approachable. A sublime reading experience.