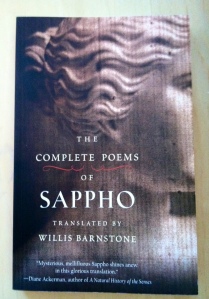 Plato called her “the tenth muse,” and yet Sappho remains an elusive figure. The outlines of her biography are sketchy, and nearly all her extant poems are fragmentary. Still, the lines we have are some of the most beautiful ever written, hungry and haunted as they are by love and loss.

Acclaimed poet and translator Willis Barnstone’s edition of the poems is grouped thematically, and he makes the interesting choice to title the poems. I’m still on the fence about the effect. In some cases, the titles merely refer to a personage named in the poem; in others, the titles reflect the obvious subject of the poem (“Old Age,” for example). With a few of the poems, however, I would have preferred an untitled version in order to better draw my own conclusions. But this is a small complaint; the volume is beautifully done, and I highly recommend it. (I’d also love to compare it with Anne Carson’s If Not, Winter, which I haven’t read yet — if you have, will you tell me what you think?)

It’s difficult to choose which poem to highlight this week, so I’ll leave you with Mr. Barnstone’s translation of fragment 130, which he titles “Sweetbitter”:

Eros loosener of limbs once again trembles me,
a sweetbitter beast irrepressibly creeping in

3 thoughts on ““Sweetbitter”: The Complete Poems of Sappho, translated by Willis Barnstone”