On Monday I reviewed Kimberly Elkins’s fascinating debut novel, What Is Visible. Ms. Elkins graciously agreed to be interviewed via email.

How would you describe the inception of What Is Visible? I understand that at one point it was a shorter piece; how did you go about expanding it into a novel?

KE: Originally, I wrote the eponymous short story after first reading about, and being dazzled by, Laura Bridgman in the New Yorker in 2001. I couldn’t believe I’d never heard about this remarkable woman who learned language fifty years before Helen Keller, and was considered the nineteenth-century’s most famous woman after Queen Victoria. The story was published shortly thereafter in the Atlantic.

To expand the short piece into a novel, I first had to do approximately two years of research, not only on Laura, but also on the other major real-life figures in her life. The story had taken place on one of the most important days of her life, when she was twenty, but the novel turned out to span almost fifty years, as I tried to fit together the pieces of both her life and how and why she had been, in effect, erased from history. The short story basically had to be deconstructed, with bits of it appearing in appropriate places throughout the novel.

Given the two recent biographies of Laura, and the wealth of archival material related to the characters in What Is Visible, how did you choose which episodes in Laura’s life to feature in the novel? 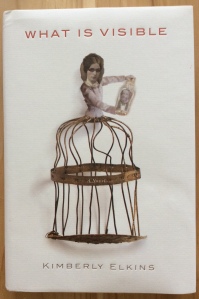 KE: Actually, the two biographies came out almost fifteen years ago; however, you’re absolutely correct in that there was an enormous amount of archival material, especially letters, journals, and newspaper and magazine articles. I chose to bookend the novel with Laura’s historic meeting with the nine-year-old Helen Keller in the last year of Laura’s life, and then to skip to her at age twelve, after she’d been at Perkins for five years. That was the year Charles Dickens visited her, and was astounded by her progress, devoting an entire chapter of his book, American Notes, to Laura. Subsequently, her fame then exploded worldwide. As for the rest of the novel, I wrote about not only the milestones in Laura’s life, but also those of the other three narrators–Dr. Howe, her mentor and founder of Perkins: his wife, Julia Ward Howe, the famous poet and abolitionist who penned “The Battle Hymn of the Republic”; and Sarah Wight, Laura’s beloved last teacher.

What surprised you most as you were conducting research for What Is Visible?

KE: The biggest surprise was always Laura: her fierce intelligence, her unwillingness to bend to the rules of society and convention, even as she desperately sought human connection. Her letters and journals display a large and imaginative vocabulary, and she was even learning French and Latin when she was tragically parted from her last teacher.

What’s one question you hope readers will ask themselves after they’ve finished the novel?

KE: Could I survive and thrive as Laura Bridgman did with only one sense? My hope is that the novel amply shows that one can live a rich and full life with even the severest of handicaps.

What’s next on your writing horizon?

KE: I’m working on another historical novel, the true-life story of two 19th-century sisters who were famous mediums as children, with one going on to found the Spiritualism movement, while the other attempted to debunk all that they had accomplished together. My other project is a wildly divergent take on the classic memoir, in which I revisit events from my life, including violent ones, and write the truth sandwiched between the best- and worst-case scenarios I can imagine, with the reader not being told which narrative is the true one. I think everyone would like the chance to revise their lives, and consider not only the paths left untrod, but also the deep, dark woods or the sunlit meadows through which those paths might have traveled.

My thanks again to Ms. Elkins for her time and thoughtful answers. You can read more about Ms. Elkins, and What Is Visible, on Ms. Elkins’s website, www.kimberlyelkins.com.

Bostonians: You can hear Kimberly Elkins read from What Is Visible at Harvard Bookstore on Tuesday, July 8 at 7:30.

3 thoughts on “An Interview with Kimberly Elkins, Author of What Is Visible”