Like his friend Siegfried Sassoon, Robert Graves survived the war. He went on to become a prolific writer, penning over one hundred books and becoming especially famous for his poetry, translations of classical texts, work on poetic inspiration (The White Goddess) and his novel I, Claudius.  (Seriously, Dear Readers, if you haven’t seen the miniseries based on the novel, go get it. It’s made for binge-watching, and features a plethora of stars: Derek Jacobi, Siân Phillips, Brian Blessed, John Hurt, and — my personal favorite — Patrick Stewart. With hair.) 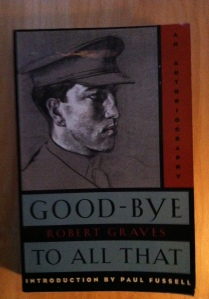 Graves is also justly famous for his only autobiography, 1929’s Goodbye to All That, considered by many to be the best memoir that came out of the war. It is, by turns, wry (, dramatic, darkly funny, and elegiac. It’s absolutely worth reading, and I heartily commend it to your attention.

Graves’s poetry about the war is not as well-known as Sassoon’s or Owen’s, but it too rings with the depth of feeling only born out of horrendous experience. In “Recalling War,” Graves borrows Homer’s knack for comparing the brutal business of war to those events common to homely life; in Graves’s poem, the speaker remembers the guns “Nibbling the walls of factory and church / Like a child, piecrust; felling groves of trees / Like a child, dandelions with a switch!” In these lines, Graves reminds us that nothing — church, work, nature itself — remains untouched by war.

“Recalling War” finds the speaker looking back twenty years after the war’s end, wondering, “What, then, was war?” He answers himself,

No mere discord of flags
But an infection of the common sky
That sagged ominously upon the earth
Even when the season was the airiest May.
Down pressed the sky, and we, oppressed, thrust out
Boastful tongue, clenched fist and valiant yard.
Natural infirmities were out of mode,
For Death was young again; patron alone
Of healthy dying, premature fate-spasm.

and later in the poem,

War was return of earth to ugly earth,
War was foundering of sublimities,
Extinction of each happy art and faith
By which the world has still kept head in air,
Protesting logic or protesting love,
Until the unendurable moment struck –
The inward scream, the duty to run mad.

It is a bitter remembrance, and Graves offers us no comfort in the poem’s final lines:

Down in a row the brave tin-soldiers fall:
A sight to be recalled in elder days
When learnedly the future we devote
To yet more boastful visions of despair.

You can read the full poem at The Legacy Project.