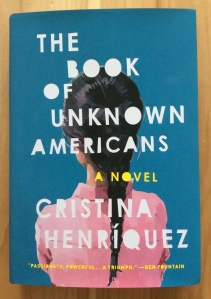 As The Book of Unknown Americans* opens,  Alma and Arturo Rivera arrive in Delaware with their daughter, Maribel. The journey was long and uncomfortable, and already they miss their life in Mexico, but what they hope for eclipses all the uncertainty and fear they face: they just want their daughter, injured in an accident, to get well.

They’ve waited for months for Arturo to find work — though in Mexico he worked as a skilled builder, here he works long days in darkness at a mushroom-growing facility — so that Maribel can attend a school that might help her manage the memory loss and personality fluctuations that resulted from her accident.

Some of the first neighbors to welcome them to their new apartment complex are the Toros, a family who fled political upheaval in Panama years before. Mayor is about Maribel’s age; he’s shy, bullied at school, and woefully unskilled at soccer compared to his older brother. He feels caught between two worlds: “I felt more American than anything, but even that was up for debate according to the kids at school [. . . ] The truth was that I didn’t know which I was. I wasn’t allowed to claim the thing I felt and I didn’t feel the thing I was supposed to claim” (78). Mayor falls immediately for Maribel’s beauty, but as the weeks go on they develop a deep friendship.

While Maribel is at school and Arturo is at work, Alma navigates life in a strange country, helped along by Mayor’s mother Celia. After a run-in with a menacing teenager soon after their arrival, Alma is extremely protective of Maribel.  Her protectiveness and Mayor’s growing affection for Maribel soon lead to friction between the two families, and, eventually, tragic consequences.

The Book of Unknown Americans is about love: not just romantic love, but the love of parents for their children. It’s not a Romeo and Juliet story, and I appreciated the depth of the narrative that’s due to Alma and Mayor’s alternating narration.

The novel is also an evocative rendering of the multiplicity of immigrant experiences. In deftly composed vignettes, Ms. Henríquez introduces us to many of the residents of the Toros’ and Riveras’ apartment complex, men and women from all over Latin America, men and women with sad and funny and terrible stories. These small sections, told in characters’ own voices, feature some of the best writing in the novel; I wanted to know more about these characters. The brevity of these sections is deliberate, of course; even these sketches are more than we usually read about the “unknown Americans” of the novel’s title. As Micho Alvarez puts it,

When I walk down the street, I don’t want people to look at me and see a criminal or someone that they can spit on or beat up. I want them to see a guy who has just as much right to be here as they do, or a guy who works hard, or a guy who loves his family, or a guy who’s just trying to do the right things. [. . . ] We’re the unknown Americans, the ones no one even wants to know, because they’ve been told they’re supposed to be scared of us and because maybe if they did take the time to get to know us, they might realizes that we’re not that bad, maybe even that we’re a lot like them. And who would they hate then? (237)

Tomorrow: An interview with Cristina Henríquez, author of The Book of Unknown Americans