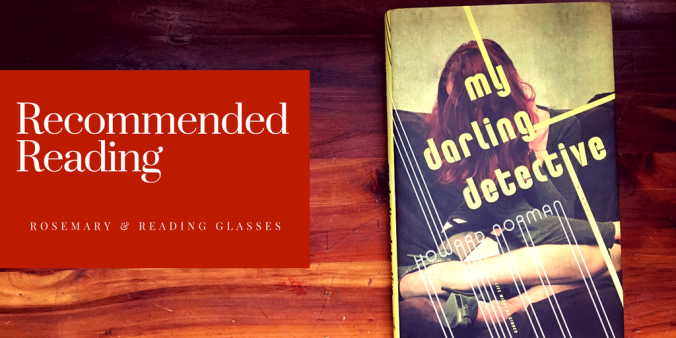 Howard Norman’s My Darling Detective* is a delight, a blend of noir and family drama set in 1970s Halifax.

Jacob Rigolet works as an art buyer for an eccentric collector in Halifax, attending auctions in London and Amsterdam. But it’s at an auction in his hometown that something very, very strange happens: his mother, a former head librarian who’s been recovering in a “rest hospital” after a nervous breakdown, walks straight up to the photograph on the docket (which depicts the a dead American soldier in Leipzig at the end of the Second World War), and throws a bottle of ink at it.

Police detective Martha Crauchet, Jake’s no-nonsense fiancee, is assigned to the case, which becomes more intriguing as time goes by. Jacob learns, among other things, that he was born in the Halifax library, that his father isn’t who he thought he was, and that his biological father is a suspect in a 1940s murder in case that wasn’t closed. Somehow, Nora links these facts and cases together. Slowly, Martha and her partners, the gruff Tides and Hogdgon, begin to pull the picture into focus. Jacob catalogues the shifts in the story, his straightforward, almost archival accounting of events suggesting his background as a researcher and his desire to keep his shifting life under control.

All of the characters, from Jacob’s particular, meticulous employer to his long-suffering mother to Martha’s partners, are memorable, but I loved Martha best. She has excellent taste in poetry, we learn early on; she keeps Jake’s coffee warm by covering it with a copy of Margaret Atwood’s The Journals of Susanna Moodie** . Martha is one of Mr. Norman’s women who know what they want and don’t mind saying so. She shares quite a bit in common with Leah, the heroine of her favorite radio program, a noir-style detective show set in the 1940s (by way of time travel; as the novel goes on, the radio show and the novel’s plot begin to echo each other); both women are capable, skilled, and deeply in love with men who are looking for answers. My Darling Detective is a story about old family secrets, detective work, and the power of art, but it’s also a gloriously homey vision of a relationship that works. Take this passage:

So many of Martha’s and my declarations of love, bewilderment, moods, and, on rare occasions, doubt, all the human stuff orchestrated by intuition and the desire to keep us honest with each other, took place at her kitchen table.

A wonderful sentence, isn’t it?

Though My Darling Detective includes some of the elements you might expect to find in one of Mr. Norman’s novels—eastern Canada, murder, radio, plainspoken people—it’s a bit more hopeful, I think, noir with a spring in its step and a lilt in its voice. As I said, delightful, and highly recommended.

Related: Reviews of Next Life Might Be Kinder and I Hate to Leave This Beautiful Place.

**(I happen to own a first edition myself, which Margaret Atwood signed at an appearance in Boston, one of the highlights of my literary life.) 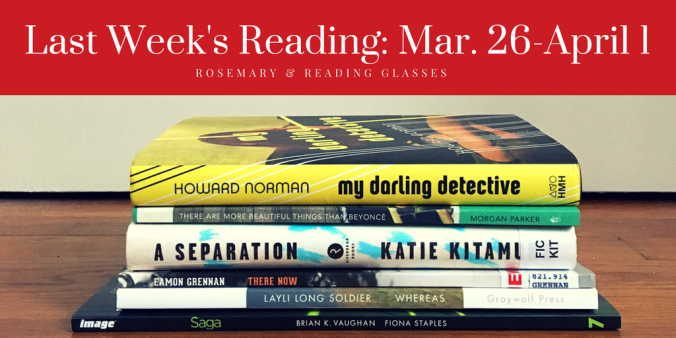 There Now, by Eamon Grennan: I’ve forgotten what led me to request this poetry collection from the library, so if it was your recommendation, please let me know in the comments! This was my first time reading Mr. Grennan’s work (I’m sure I’ve said this before, but the more I read contemporary poetry, the more I realize I haven’t read) and I enjoyed it thoroughly. There Now features poems that are short on commas, long on inventive hyphenated adjectives, and virtuosic in their syntax. I’ll be adding this to my Christmas list come the end of the year.

A Separation, by Katie Kitamura: In A Separation, the narrator learns that her estranged husband is missing, and travels from London to Greece to seek him out. That their separation is secret makes an already unfortunate situation even more complex, especially when Christopher’s overbearing mother and possible fling are thrown into the mix. This is a cool, controlled a novel that’s more about the narrator’s psychology and observations on relationships than it is about the mystery plot. While I appreciated those observations and Ms. Kitamura’s handling of alienation as a theme, the style—run on sentences meant to approximate the slip-patter of thought—was to me intrusive, and detracted from my reading experience.

Whereas, by Layli Long Soldier: I’ll be posting a full  review of this searing collection soon.

My Darling Detective, by Howard Norman: This new novel by one of my favorite authors didn’t disappoint. Full review coming soon.

There Are More Beautiful Things Than Beyoncé, by Morgan Parker: Goodness, I wish I could have made it into Boston to hear Ms. Parker read from this collection—with their rhythmic intensity, these poems beg to be read out loud. Pop culture, politics, and personal experience are woven together throughout the collection, which ranges in tone from jaunty and risqué  to forlorn. “I’m a little unpolished / behind the scenes,” the poet writes. Some of my favorite poems include “99 Problems,” “Delicate and Jumpy” (“I’m a museum / of  necklines and cloudscapes, a heaven / diving into the wrong hard mountain.”), “Afro,” and “Slouching Toward Beyoncé.” An excellent collection and a must-read for its perspectives on race, feminism, and vulnerability.

Saga Vol. 7, by Brian K. Vaughan & Fiona Staples: I adore Saga; it convinced me to try other comics and graphic novels, but aside from Alison Bechdel’s Fun Home, none have impressed me like Saga. This installment is pretty bleak, but I think that was to be expected. Can’t wait to see what’s in store for Hazel and her family next.

Howard Norman is the kind of writer who gives you the bad news up front. Take the opening paragraph of his best-known novel, The Bird Artist (1994):

My name is Fabian Vas. I live in Witless Bay, Newfoundland. You would not have heard of me. Obscurity is not necessarily failure, though; I am a a bird artist, and have more or less made a living at it. Yet I murdered the lighthouse keeper, Botho August, and that is an equal part of how I think of myself.

(If you haven’t read The Bird Artist, you should rectify the situation immediately.)

Mr. Norman’s new novel (out last week), Next Life Might Be Kinder*, begins: “After my wife, Elizabeth Church, was murdered by the bellman Alfonse Padgett in the Essex hotel, she did not leave me.” It’s a bold strategy, to declare in one’s opening sentence the plot points other writers might build toward — but for Mr. Norman, the strategy always works.

Writer Sam Lattimore, Next Life Might Be Kinder‘s narrator, finds himself living in a small cottage hours away from the Essex Hotel, where he and his wife spent the early months — the only months — of their marriage. He’s meeting with a therapist, evading the film director who bought the rights to his tragic story — and the director’s assistant, and seeing his wife on the beach at night. He’s angry, and he’s desperately in love with Elizabeth. As the novel unfolds, Sam recalls how he and Elizabeth fell in love, what their life was like before she died, and the lurking menace of Alphonse Padgett.

Mr. Norman’s writing is, as ever, beautiful. The characters — Sam, Elizabeth, Sam’s new neighbors Cynthia and Philip, Dr. Nissensen the therapist, the unhinged Norwegian film director, even Marghanita Laski, whose work is the subject of Elizabeth’s dissertation — are finely delineated. Objects and places are imbued with significance; the two-page chapter called “Still Life with Underwood Typewriter,” which describes Elizabeth’s desk, is the best characterization-by-catalogue I’ve ever read.

Elizabeth’s appearances to Sam are mysterious, but never campy or sentimental. Sam loves his wife immensely but doesn’t sanctify her: “And I don’t need metaphor to try and elevate her to a deity. She is just Elizabeth. She made good soups and stews. She was writing a book. She used pencils” (80). Next Life Might Be Kinder is, quite simply, a perfect exploration of the particularities of grief. 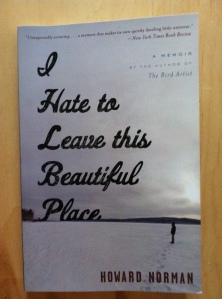 After I finished the novel — in two sittings — I happened upon a review that mentioned its relationship to some of the writing in I Hate to Leave This Beautiful Place, a memoir by Mr. Norman published last year. I went to the library and read it immediately, then bought my own copy, because it’s a wonderful memoir, and I’ve never much liked the genre. In five sections, Mr. Norman explores pivotal periods in his life; several of the events echo in Next Life Might Be Kinder.

I’ll let the writer himself summarize I Hate to Leave This Beautiful Place:

What is remembered here? A bookmobile and an elusive father in the Midwest. A landscape painter whose plane crashed in Saskatchewan. A murder-suicide in my family’s house. A Quagmiriut Inuit rock band specializing in the songs of John Lennon. And in Vermont, a missing cat, a well drilling, and my older brother’s requests to be smuggled into Canada. If there is one thing that connects these disparate experiences, it is the hopeful idea of locating myself in beloved landscapes — Northern California, Nova Scotia, Vermont, the Arctic — and of describing how they offered a home for honest introspection, a place to think things through. Often I just wanted to look at birds for days on end, shore birds in particular. (xi-xii)

These are beautiful books, and highly recommended.

*I received a copy of Next Life Might Be Kinder from the publisher in exchange for an honest review.