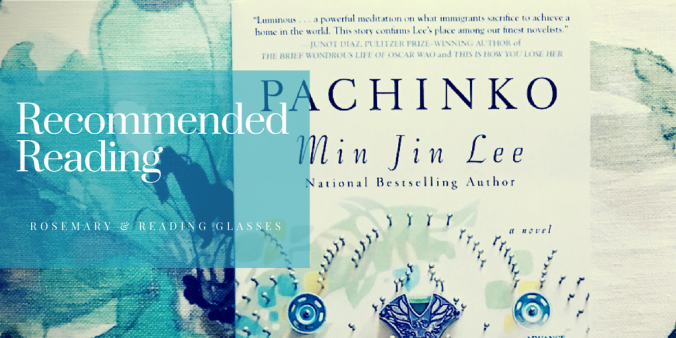 Since I finished reading Min Jin Lee’s wonderful novel Pachinko*, I’ve been thinking about family sagas. The appeal is perspective, I think; as readers we’re able to see the lives of multiple generations with a wholeness we are not afforded in the course of our own lives.

We know our own stories intimately, of course, and our parents’ and children’s pretty well, if we’re fortunate enough to enjoy close relationships with them, but then those third generations on the outside—our grandparents and our grandchildren—are beyond our ken in most respects. No matter how much I adored my grandmother (and I adored her very much), I couldn’t really know what it was like for her to grow up during the Depression, or what the atmosphere was like one the night she watched the Moon landing, or why she liked gardenias. And if I’m lucky enough to have grandchildren, I will not live long enough to see the sorrows and triumphs of their middle age; I cannot imagine the political and technological differences between their era and my own.

It’s a pleasure to feel these limitations lifted (if only for a little while, and only in fiction) in a novel as expansive, humane, and well written as Ms. Lee’s Pachinko, which begins, “History has failed us, but no matter.”

We meet first an unnamed couple, the grandparents of Sunja, Pachinko‘s center and beating heart. Hardworking and thrifty, these two have only one son, kind and loyal, who in turn marries a hardworking woman named Yanjing, Sunja’s mother. Mother and daughter work hard at the boardinghouse they run on a small islet near Busan, in Korea, and it seems that Sunja will take her mother’s place one day—until she becomes pregnant. In the early 1930s, in their community, the shame is unbearable, but a young missionary staying with them offers to marry Sunja and bring her with him to Japan, where he is to work as a minister, and where his brother and sister-in-law are waiting for him.

In Japan, Sunja, grateful for the kindness of her gentle new husband and the friendship of her sister-in-law Kyunghee, tries to forget her lover and settle into her new life. But Koreans in Japan are treated very badly, and soon, with war upon them, the family is struggling to survive.

Sunja’s two children, Noa and Mozasu, both born in Japan, grow up feeling as if they don’t have a home, exactly. Japan will not accept them as citizens; Korea, now split, may not take them in. They face this heartbreaking conundrum in different ways: Noa studies hard to become a “model” Korean, wishing he could blend in and pass for Japanese; Mozasu determines to make the best of things and finds lucrative employment at a pachinko parlor, an industry dominated by Koreans.

Pachinko, an arcade game rather like pinball, but with an element of gambling, is an apt metaphor for the role of history in the novel. For Sunja and her family, the sweep of history deals them many, many hardships and the occasional bout of good fortune, but always their ethnicity marks them as different from those they live among. And for Sunja, Yangjin, and Kyunghee, their sex also reduces their options (economically, politically, and within the family) without reducing their labor. Ms. Lee has written not only a searing novel about the immigrant experience and an extraordinarily evocative historical novel, but also one that subtly and yet relentlessly shows readers the value—and the price—of women’s work.

Ms. Lee’s writing is fluid and expressive, keeping the reader firmly planted in the twentieth-century homes and workplaces of her characters. Here’s Sunja, making candy to sell in Osaka, remembering her home:

Yeongdo, their little rocky island, stayed impossibly fresh and sunny in her memory though she hadn’t been back in twenty years. When Isak tried to explain heaven, she had imagined her hometown as paradise–a clear, shimmering beauty. Even the memory of the moon and stars in Korea seemed different than the cold moon here; no matter how much people complained about how bad things were back home, it was difficult for Sunja to imagine anything but the bright, sturdy house that her father had taken care of so well by the green, glassy sea, the bountiful garden that had given them watermelons, lettuces and squash, and the open air market that never ran out of anything delicious. When we was there, she had not loved it enough.

Pachinko is a gorgeous novel that asks nuanced questions about home, faith, and family, questions asked in new ways with each new generation. When the last of Sunja’s family members is introduced, I wished the novel would keep going, so I could learn what would happen to him, too. But the story never ends, does it?

* I received a copy of this book from the publisher for review purposes, which did not affect the content of my review.