I love The Best American Short Stories anthologies; usually, I’ll have one around for quite awhile, dipping in from time to time when I want to read a story but don’t want to commit to a novel or a whole collection.

This year, though, I read The Best American Short Stories 2016* cover to cover, and I’m so 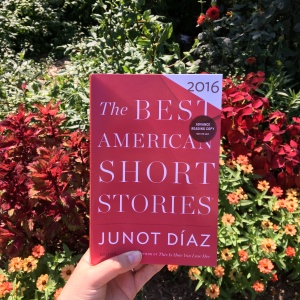 glad I did. Like many writers, I subscribe to a rotating cast of literary magazines, but it’s impossible to read them all—unless that’s your job. Guest editor Junot Díaz and series editor Heidi Pitlor read many, many stories and chose twenty for this year’s anthology. Their choices are diverse in style, length, subject, and authors’ identities. This is a stellar collection, and I highly recommend it.

While I’d be happy to read any of these stories again, and Junot Díaz’s introduction is not to be missed, standouts (to me) included:

Two other stories, “Cold Little Bird” by Ben Marcus and “Gifted” by Sharon Solwitz, scared the heck out of me. The first is about a little boy who suddenly and totally withholds all affection from his parents; the second is about a woman whose son becomes critically ill. That’s not really what they’re about, of course–that’s just the framework, but let me tell you: chills. I had to go eat a piece of chocolate after “Cold Little Bird.”

And if you haven’t yet read Louise Erdrich’s excellent LaRose, you can get a taste here; her story “The Flower” is adapted from the novel.

Finally, one of the best parts of these anthologies are the Contributors’ Notes at the end–each includes a short bio of the author and some background on how the story came to be written and published—whether dashed off in a day or labored over for years and dozens of drafts. Fascinating.

Have you read any of the “Best American” anthologies? Do you have a favorite to recommend?