When Margaret Atwood’s Hag-Seed* arrived in the mail, I could barely contain my glee. Margaret Atwood (the Helen Mirren of authors, as I sometimes think of her) taking on Shakespeare? Yes please! 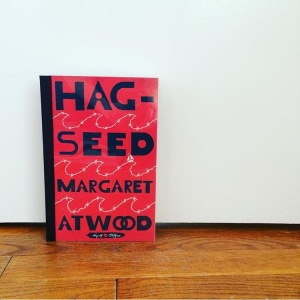 Hag-Seed lived up to all my expectations (and it’s the best so far in the Hogarth Shakespeare series, too). I highly recommend the book (and teachers, it would be fabulous to teach alongside its source material), which is often funny, often touching, often a rollicking good time (especially for Shakespeare aficionados), and always thoughtful. It’s a tour-de-force reimagining of The Tempest, and like the original, a provocative examination of theatre, authorship, imprisonment, revenge, and grief.

Felix Phillips is the impresario Artistic Director of the Makeshiweg Theatre Festival. His productions have been beyond avant garde (audience complaints include “Did Lear have to take off all his clothes?”; Felix thinks, “What was so bad about Macbeth done with chainsaws? Topical. Direct.”), and after the sudden loss of his beloved daughter, Miranda, he throws himself into the play he thinks will bring her back to life: The Tempest. However, he’s so caught up in preparations that he doesn’t notice the machinations of Tony Price, his glad-handing lieutenant, who, with the help of Lonnie Gordon, the Chairman of the Board, subsequently ousts Felix from his position.

Despondent, Felix retreats to a hovel in the Canadian backwoods, contemplating revenge and building a new life as “Mr. Duke.” As his alter-ego—which is of course Prospero, as he knows—he takes a job teaching Shakespeare through performance to prison inmates. Years pass, but when Tony and Lonnie seem poised to pass within his orbit, Felix hatches his revenge plot—and begins to teach The Tempest to the Fletcher Correctional Players.

Hag-Seed is delightfully layered; it’s a novel whose plot is taken from a play, and in the novel the characters are enacting the play as they prepare to enact the play (got that?). And by writing Felix teaching his players The Tempest, and respecting their (varied) readings of it, Margaret Atwood is teaching us about the text and its interpretations—while also conveying the importance of literature in prisons. “It’s the words that should concern you [. . . ] That’s the real danger. Words don’t show up on scanners,” Felix thinks, going through the metal detectors and chatting with the guards.  Atwood is, of course, fascinated with imprisonment (The Handmaid’s Tale, The Heart Goes Last, Alias Grace), so it’s a treat to watch her teasing out the power relationships in the novel (and in The Tempest).  It is, as the kids used to say, very meta.

As some reviewers have noted, the minor players are not remarkably distinct from each other; our knowledge of their backgrounds is limited. While that might be a fault in a standalone novel, to me this decision makes sense given the source material. Without picking up your Collected Works, can you recall how Stephano and Trinculo differ?

There are, of course, departures from Shakespeare’s play. Felix is animated not only by revenge and a desire to reclaim his position, but also, most importantly, by grief (in a way that Prospero is not). For Felix, staging The Tempest is a way to make Miranda live again, to take substance, almost. During his years of exile, his imagining of the lost girl is a ghost, a spirit, gradually transforming into Ariel whispering in his ear.

And Prospero, in these years of exile, is Caliban, misshapen by grief and the thirst for vengeance, pinched by loneliness into a new version of his former wild self, but able to call up sweet music and language all the same.  That’s why (I believe) the book is called Hag-Seed, after one of Prospero’s epithets for Caliban; the word brings them together, and means, of course, the child of a witch. And what is Atwood if not a conjuror, and what are her books if not progeny that cannot die?

My take on Margaret Atwood’s most recent previous novel, The Heart Goes Last (which I read as a take on Milton)

Review of Vinegar Girl, Anne Tyler’s novelization of The Taming of the Shrew

Review of The Gap of Time, Jeanette Winterson’s retelling of The Winter’s Tale