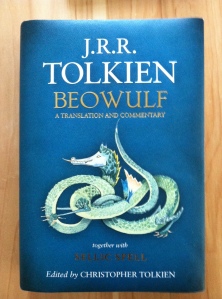 (The dragon on the front cover is one of J.R.R. Tolkien’s drawings.)

I have been looking forward to the publication of J.R.R. Tolkien’s translation of Beowulf* for ages, and this book more than met my expectations. It’s a treat for Tolkien aficionados like yours truly.

Here are the book’s major sections:

In his preface to the work, Christopher Tolkien quotes his own foreword to The Legend of Sigurd and Gudrún: “‘Of its nature it is not to be judged by views prevailing in contemporary scholarship. It is intended rather as a record of his perceptions, in his own day, of a literature that he greatly admired'” (xiii). The same, he writes, applies to this version of Beowulf.

Christopher Tolkien (approaching 90) has shown a faithfulness and care for his father’s legacy that rivals Sam Gamgee’s for Frodo; without him, it’s difficult to say that we’d have The Silmarillion, or Unfinished Tales, or Children of Húrin, or The Fall of Arthur. Here, he’s provided a painstaking record of his work to bring this edition of Beowulf together, and helpfully elucidated many of his father’s notes.

Christopher Tolkien’s Introduction discusses the manuscript versions of his father’s translation, one of which, like the Beowulf manuscript itself, is damaged. J.R.R. Tolkien’s (prose) translation of the poem presented here is dense, packing nuances of meaning into every line. As one of my uncles** pointed out, quite rightly, this edition of Beowulf will not dethrone Seamus Heaney’s masterful verse translation as the edition of choice in classrooms, but it’s fascinating reading for those of us who love to read Tolkien in any form. Fans of The Lord of the Rings who read this Beowulf will recognize names and phrases that Tolkien borrowed for his own epic. Tolkien’s learned commentary (chosen from a large store of notes and lecture materials by Christopher Tolkien) illuminates particular textual cruces and passages of interest.

The hidden gems in this book are Sellic Spell and The Lay of Beowulf. The Lay of Beowulf, here presented in two versions, is a short, ballad form of the Beowulf story that is meant to be sung; Christopher Tolkien remembers his father singing it to him as a child, more than eighty years ago.

Sellic Spell is the name Tolkien gave to his reconstruction of the mythic-fairy story (as opposed to political-historic) component of Beowulf (Tolkien’s translation of his own work into Old English is also included, because yes, the man was that amazing). It’s absolutely wonderful, engrossing as the best fairy tales are, filled to the brim with descriptive touches. Parts of the dialogue recall The Hobbit, and indeed, at  twenty-five pages in the finished version, Sellic Spell is the perfect way to introduce Beowulf to younger readers, though adults  will love it, too.

This a delightful volume, a must-have for fans of Tolkien or Beowulf (or both), and highly recommended to the general reader for its inclusion of Sellic Spell and The Lay of Beowulf.

13 thoughts on “Recommended Reading: J.R.R. Tolkien’s Beowulf: A Translation and Commentary, Together with Sellic Spell (Edited by Christopher Tolkien)”