Published last year to critical acclaim (and just longlisted for the 2013 Man Booker Prize), Colm Tóibín‘s The Testament of Mary is a short novel (only eighty-one pages) that upends our (or at least, my) cultural conception of Mary. 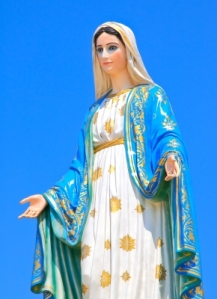 In  Mr. Tóibín’s vision, the mother of Jesus does not believe that her son is divine, tries to save him from a path that will lead to execution, thinks his followers are a mob of lost men, and flees for her life before her son’s death on the Cross. She thinks of John and Paul (not named; I’m inferring—please correct me if I’m in error) as supercilious keepers, rather than trusted supporters. In her old age, Mary judges herself harshly, and her opinion of the nascent Christian movement is hardly charitable.

This novel isn’t plot driven, and I didn’t expect to like it. I’m still not sure how I feel about it, to tell the truth. But what I did appreciate was the intimacy and immediacy of Mary’s voice. Mr. Tóibín makes her come alive (with unexpected thoughts and feelings, to be sure) dissolving the distance that I feel when reading about her or seeing a painting of her.

Oddly, this portrayal of Mary reminded me of Olivia Hussey’s performance in Zefferelli’s Jesus of Nazareth (a family tradition at Christmas and Easter when I was growing up). Unlike this older, wearier Mary, Ms. Hussey’s Mary is convinced of her son’s divinity and supportive of his ministry. Like Mr. Tóibín’s Mary, however, she is infused with quiet strength and dignity.

Have you read The Testament of Mary? What did you think? If you haven’t read it, do you plan to?

19 thoughts on “A Book I’m Not Sure What to Make of: The Testament of Mary, by Colm Tóibín”