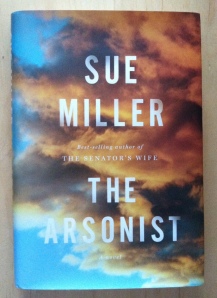 Sue Miller’s The Arsonist* is a work of exceedingly careful observation, so careful that for me the novel had an almost gauzy quality, as if the narrator, like an officer at a barricade, had removed me several paces back from the action. This is not to denigrate the novel by any means; The Arsonist is a thoughtful meditation on how people find and understand their places in the world even as that world is constantly in flux.

It’s the late 1990s, and Frankie Rowley has left East Africa to visit her parents in New Hampshire at what was once their summer home, but is now their full-time residence. After many years in aid work, Frankie wonders what good she’s really done, and if, maybe, it’s time to seek a permanent home back in America, with all that ‘home’ entails — partner and family included. As she thinks about what to do, she’s drawn back into her parents’ orbit, witnessing Alfie’s decline into dementia and her Sylvia’s struggles to care for him.

On the night she arrives, one of the summer houses — empty — is set ablaze, and in the following weeks the small town of Pomeroy is set on edge my more and more burnings. All the burned houses belong to the summer folk, and the arsons reveal the long-simmering tensions between the town’s year-round residents and the wealthy summer people: Between the two groups stands Bud, owner and chief reporter of the local paper, a transplant from Washington, D.C. who’s working out his place in Pomeroy:

[. . . ] the fires were somehow framing a question he needed to answer for himself about whose home Pomeroy was, whose experience defined it–the chatty, self-assured summer people or the observant, perhaps resentful, year-round folks. A question about who owned the town and who merely used it. (93)

Bud falls hard and fast for Frankie. Their relationship rests on uncertain ground as the fires rage, Frankie’s father gets worse, and Frankie resists making a decision about her future.

The Arsonist is a sensitive, thoughtful book, despite the lurid suggestion of its title, far more concerned with character than with pyrotechnics. Take this passage on the meaning of home:

Maybe, Frankie thought, home–what felt like home–was just a way of being in the world that felt Alfie-like to him, like being the person he’d been before the changes that were slowly turning him into someone else began. Maybe by home he meant the time when he felt whole, when he felt like himself. The time–and perhaps one of the places–where the world seemed to recognize him in some deep way, seemed to say, Come in, we’ve been expecting you. Exactly you. (271)

This is the perfect novel for summer — it’s set in summer, long enough ago to feel  both fresh and nostalgic (remember when not everyone had a cell phone), and engaged with questions we all think about, even when, thankfully, our towns aren’t on fire.

3 thoughts on “Recommended Reading: The Arsonist, by Sue Miller”