Long ago, when the world was still getting used to Pierce Brosnan was James Bond, I started reading Ian Fleming’s novels at my grandmother’s house, where the slim paperbacks, spines emblazoned with the title and the minimalist “/Fleming” had been left behind by my uncles. (Thankfully, I didn’t start with The Spy Who Loved Me.)

Since then, I’ve had a fondness for both short books and spy novels, which, despite their content, tend to make me think of open windows, box fans, and tomato sandwiches eaten with one hand. They’re summer books, at least for me, serving as quick palate cleansers between heavier main courses. 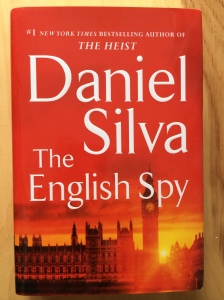 And so I was happy to zip through Daniel Silva’s The English Spy*, which is, I learned, the latest installment in a long series of best-selling novels (which appear most summers) featuring Gabriel Allon, an Israeli spy and art restorer. I should note here that I haven’t read any of Mr. Silva’s previous novels, but I had no trouble jumping into the story and getting a sense of the characters, so don’t let prior unfamiliarity stop you from picking up the book.

The book opens when a skilled assassin sinks the yacht carrying a certain (unnamed) English former princess; Gabriel is called in to help find the killer, and he recruits an old friend to help him. Together they track the bomber, who has ties to an ultra-violent faction of the IRA and various terrorist organizations. And of course, as in any good espionage thriller, there’s always a bigger fish.

The English Spy features plenty of action and twists, memorable minor characters, and solid writing. It’s violent, but not unusually so for a spy novel, and features far fewer adult shenanigans or gadgets and far more politics than your average James Bond book (or movie, for that matter). More Patriot Games than Goldfinger. It’s a fun, fast read.

Now, I promised summer reading two ways. There’s quick-reading genre fiction, like The English Spy, and then, at least for me, short, serious fiction.

Colum McCann’s Everything in This Country Must (2001) is the latter, a mini-collection of two short stories and a novella. All three take place in Northern Ireland during the “troubles” (which made me pick it up after The English Spy‘s focus on the IRA), and all three feature young people and their parents trying to negotiate the uncertain world they find themselves in. In the title story, a girl and her father try to save their horse, unwillingly helped by British soldiers. In the second short story, a boy conceals his involvement in helping his mother make supplies for the Protestant marches. In the novella, Hunger Strike, a boy and his mother move to a small trailer in a new town, and the boy flounders in his anger as they live out the days of his uncle’s hunger strike.

The writing is just gorgeous, simple with impeccably-placed figurative language. These are bruising, brilliant stories; the book is a small masterpiece. Highly recommended.