Well, I think it’s time to acknowledge the Romantics around here, don’t you?

Truth be told, Byron, Shelley (Percy, that is), and Wordsworth have never been my cup of tea (if they’re yours, please direct me to poems that will change my mind!), but I’ve loved Coleridge since I was a child, since Kubla Khan and The Rime of the Ancient Mariner paint such vivid pictures in the mind (and they’re exciting!).

I think I may have run across Keats in high school, but it wasn’t until a Romanticism class in college that I got a big dose. Seriously, the only word that properly describes his poetry is “romantic” — he’s the epitome of the movement. You’ll find Wordsworth and Byron in some of my various anthologies, but one of my prized books is an 1892 copy of The Poetical Works of John Keats; when I win the lottery, I’ll be able to afford a binding repair.

I know it may sound a bit overly, ahem, romantic, but I love having a book of his poems from the same century during which he lived and breathed. 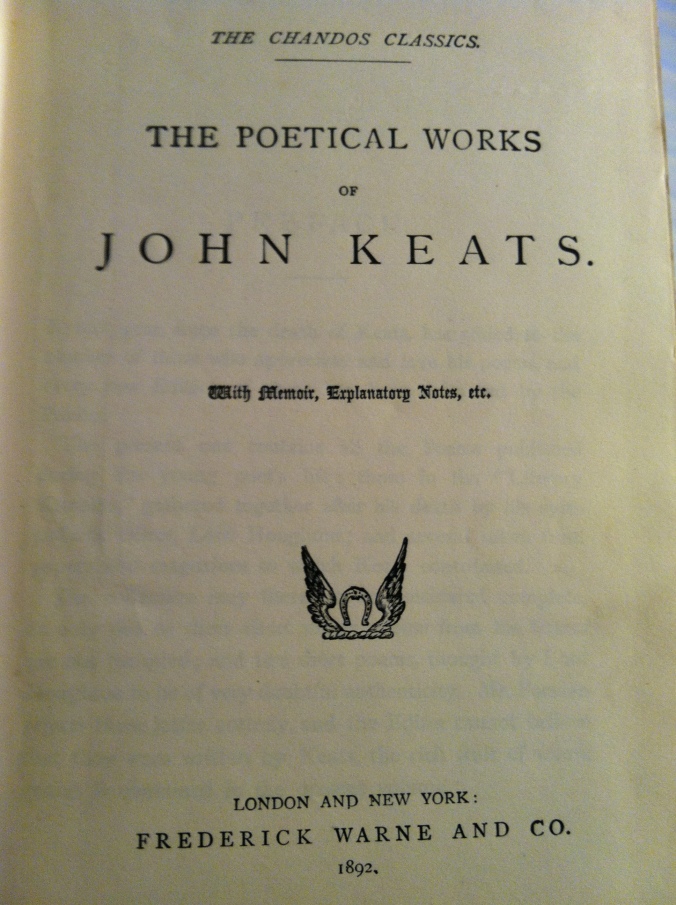 “Bright Star” is a love sonnet he wrote to Fanny Brawne, his fiancee and center of adoration in the last two years of his life. Jane Campion’s gorgeous, perfect film Bright Star focuses on their relationship; if you haven’t seen it, please locate your handkerchief and then borrow it from your local library (you’ll want to buy it after, I promise.)

Bright star, would I were stedfast as thou art—
Not in lone splendour hung aloft the night
And watching, with eternal lids apart,
Like nature’s patient, sleepless Eremite,
The moving waters at their priestlike task
Of pure ablution round earth’s human shores,
Or gazing on the new soft-fallen mask
Of snow upon the mountains and the moors—
No—yet still stedfast, still unchangeable,
Pillow’d upon my fair love’s ripening breast,
To feel for ever its soft fall and swell,
Awake for ever in a sweet unrest,
Still, still to hear her tender-taken breath,
And so live ever—or else swoon to death.

Which Romantic poems are your favorites?

4 thoughts on ““Bright star, would I were as steadfast as thou art””