picked up Amy Clampitt’s The Kingfisher at a used bookstore in Central Square sometime in January. It’s a gorgeous book in more ways than one; originally published in 1983, my copy is from the eighth printing in 1989, and it’s pristine. Heavy, unyellowed paper, gorgeous design. Well done, Knopf.

I came to the book knowing nothing about Amy Clampitt, but it was an utterly delectable reading experience; Clampitt’s facility with aural language reminded me of the fun I had reading Hailey Leithauser’s Swoop last year. (More on the language in a moment.)

As I read, I couldn’t believe I hadn’t heard more about this wonderful poet, and once I did a bit of research, I started to see why: born in 1920, Amy Clampitt died in 1994. The Kingfisher was her first major book, and remains her most famous.

My favorite poems in the book are those that appear first, largely set along the rocky Maine coastline (of which I am quite fond), but all six of the book’s wide-ranging sections are spectacular. The poems are erudite without being condescending (the poet provides notes after the text), controlled but bursting with language’s multitudinous possibilities. In these pages whales are “basking reservoirs of fuel” (116) and a poem about the Dakota hotel finds the speaker telling us “Grief / is original, but it / repeats itself: there’s nothing / more original it can do.”

Here are some lines from “The Cove”:

Where at low tide the rocks, like the
back of an old sheepdog or spaniel, are
rugg’d with wet seaweed, the cove
embays a pavement of ocean, at times
wrinkling like tinfoil, at others
all isinglass flakes, or sun-pounded
gritty glitter of mica; or hanging
intact, a curtain wall just frescoed
indigo, so immense a hue, a blue
of such majesty it can’t be looked at,
at whose apex there pulses, even
in daylight, a lighthouse, lightpierced
like a needle’s eye.

The only other writer I’ve come across in the last half decade with Amy Clampitt’s command of English vocabulary is A.S. Byatt (who, by the way, Clampitt mentions in this fascinating interview with the Paris Review, which I highly recommend; unsurprisingly, she had great taste in poetry and fiction—she names Alice Munro as her favorite contemporary fiction writer 20 years before Ms. Munro won the Nobel). If (and I hope when) you pick up The Kingfisher, you’ll want a dictionary close at hand for words like these:

I could go on. At length.

I was enchanted by The Kingfisher—you can read the title poem here—and I hope you’ll let me know if you read it so we can compare notes, and maybe word lists.

Your biographical note on The Poetry Foundation’s website indicates that you started writing again after a ten-year break. What precipitated your (triumphant) return to poetry?

HL: Actually it was more like a twenty year break. I can actually point to a specific moment when I began writing again; I was on a lunch break from work, at the National Gallery standing in front of Van Gogh’s Pieta, of all things, when a poem about the painting began streaming in front of my eyes. But those tickles in the brain had really been building for several months. My mother had died that spring, and  I think that overwhelming pain had shaken things loose. Also I was about to receive her inheritance which would enable me to retire, at least for a few years.  I knew I wanted to use that time to write again, so my subconscious had been gearing up.

How did Swoop come together as a collection?

HL: Swoop started when my brother sent me a palindrome, and said it looked like a line from one of my poems. I agreed and I loved the idea of the music inherent in a palindrome so I started writing them and putting them into poems, and really very quickly, in maybe three years, I had a book length collection. At first when I gathered them up I didn’t see any other unifying theme, but as I read them together I saw the idea of excess, a celebration of excess, both in emotion and in linguistic play, seemed to be framing the manuscript.

When reading Swoop I noticed often that the effect of a particular poem was amplified by its predecessor — and “Zen Heaven” is such a powerful closing poem. How did you go about ordering the poems in Swoop? 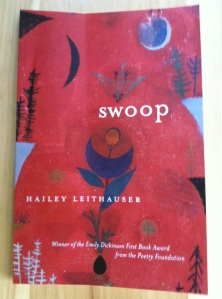 HL: I wish I could take credit for that, but when I first tried organizing the book it was terrible, truly, truly awful. I had all the poems clumped together, all of the curtal sonnets next to each other, all of the Grandiloquent Dictionary poems together, the four poems “Scythe,” “Guillotine,” “Brass Knuckles,” and “Crowbar” in one string. One of my co-winners from the Discovery Prize, James Arthur, was in town for AWP and I gave it to him for critique. He wrote me a few days later to say he loved the poems but it was like eating a pizza with all the pepperoni on one slice, all the mushrooms on another. So then I broke up all the poems, sort of scattershot, and I showed that version to Sandra Beasley. She told me I was right to break them up, but now it was too random and so she did the very difficult  job of ordering the book.  I made a few changes here and there to that version, but I stuck pretty close to her basic framework. Honestly, without their help, I can’t imagine that the people at the Poetry Foundation would have chosen Swoop.

The poems in Swoop are exuberantly musical — do you listen to music while writing? Who or what are your musical influences, and who are your favorite “musical” poets?

HL: I’ve been asked this before and the truth is I would be much too distracted it I had music on while I wrote. My favorite kind of music is blues, but I don’t see that reflected in my writing. Unless you would consider bird song to be music. I do like listening to that when I’m working in the back yard.

As far as musical poets, there are so many! Off the top of my head, I love Seidel, Stallings, Szymborska, Brooks, Ryan, and Beeder.  And Stevie Smith, Terrence Hayes,  Estes, Boss, Kevin Young, Videlock.  I’ve recently gotten into Gjertrud Schnackenberg and would like to read through all of her work. And I enjoyed Carol Light’s first book, “Heaven from Steam.”

Some of your poems refer to the Grandiloquent Dictionary, and all of them showcase a rich and dynamic vocabulary. What are  some of your favorite resources for discovering new words?

HL: I used to be a reference librarian and own a fairly decent selection of dictionaries and thesauri, and whenever I see books on interesting and archaic words I snap them up. I bought one this fall, “The Word Museum,” that gave me the word “SNOUTFAIR”  (handsome) that I put right into a poem. I recently wrote two poems about the Renaissance characters Tom o’ Bedlam and his counterpart, Mad Maudlin, and for those poems I read through a few online dictionaries of Elizabethan slang.

After the success of Swoop, what’s next on the writing horizon?

HL: I’m in between the second and third drafts of a new book, The Cannibal’s Song,, and hoping to have it ready to show to Graywolf this summer. Now that I’ve done with palindromes, my new obsession is acrostics so there are quite a few of them in Cannibal.  And about a third of it is poems that pre-date Swoop. Some of these poems first appeared in magazines ten years ago so I’m excited about finally finding a home for them.

My thanks again to Ms. Leithauser for her time and generous answers. You can read more about Swoop, and purchase the book directly from Graywolf Press, here.

Hey, remember yesterday when I wrote about how much I loved Swoop, Hailey Leithauser’s debut collection? Remember how I bet that you wanted to read the rest of “‘Was You Ever Bit by a Dead Bee?'”

Well, want no more! Here’s a link to the full text of the poem, with a special bonus: an audio recording of the poet herself reading it!

National Poetry Month is on the horizon, Dear Readers, and I can’t imagine a better way to celebrate than by picking up Hailey Leithauser’s exuberant, brilliant debut collection, Swoop*.

Reading Swoop, I couldn’t help but notice myself smiling at first. Then there was the impulse to read aloud, to drum the table in front of me. These poems are musical, rhythmic, dance-provoking. They’re fearless and funny and macabre and eloquent. I loved them.

I came to this conclusion exactly two poems into the collection. The first poem, “Scythe,” imagines the desires of that object, with one of the best images of opposition I’ve ever read . The scythe wants

the one
that is larder, the other

For those keeping track of such things — killer linebreaks, right?

I’ve made no secret of my love for Bogie & Bacall’s first joint film, To Have and Have Not, and so I was prepared to fall hard for Swoop‘s second poem, “Was You Ever Bit by a Dead Bee?” — which, of course, I did. It’s a poem that answers the movie’s famous question, with the kind of rhythm that would make Hoagy Carmichael proud. Here are the first two lines:

I was, I was—by its posthumous chomp,
by its bad dab of venom, its joy-buzzer buzz.

Doesn’t that make you want to read the rest?

As you can probably tell, Ms. Leithauser is the kind of poet who’s enchanted by the sounds that words make, and by the wonderful oddities of the English language.  (More than once I turned to my trusty OED: after all, how often does one encounter “lamaseried”?) Indeed, several poems are composed of entries “From the Grandiloquent Dictionary” (look for a particularly hilarious entry, Metrophobia. Then look up metrophobia.) Reading Swoop is in some ways like like listening to a Dorothy Parker who’s fascinated not only by people, but by the personalities of words themselves. Take these lines, from “Schadenfreude”:

and always so
honestly,

I’d love to take you through each and every one of Swoop‘s poems to tell you what I love about them, from the dazzling description of one of Moby-Dick‘s tragic characters (“Pip, Mid-Sea”), to the bluesy “Bad  Sheep” with its twenty-six synonyms for dark (except black), from the darkly comic “Sex Circumspect” to the downright funny “Sex Fiasco.”

I feel rather cruel, Dear Readers, for passing along these tantalizing morsels and not full plates. Luckily, Swoop is a feast, and you’re invited.

*My thanks to Graywolf Press for sending me a review copy of Swoop.

Tomorrow: One of Hailey Leithauser’s poems will be the featured poem of the week.

Wednesday: An interview with Hailey Leithauser, author of Swoop, winner of the Emily Dickinson First Book Award from The Poetry Foundation.