When I was a child, I hated Watership Down.

I think most of my dislike was bound up in the movie, which I found frightening — to this day, the only memories I have of it are images of cartoon rabbits spouting blood — because the writing itself didn’t make an impression on me. Reading synopses now, I suspect that if I tried it again I’d find it deeply aggravating for its attitude toward female characters. 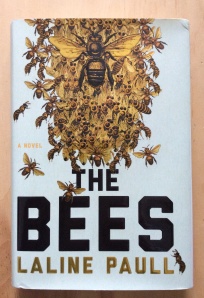 I bring this up because Laline Paull’s The Bees* (out May 6 from Ecco) is garnering praise that compares it to Watership Down, and so I’m here to tell you that if you didn’t like Watership Down, you might still like The Bees — I did, very much.

Like Watership Down, The Bees‘s main characters are nonhumans, in this case — you guessed it — bees. Flora 717 is born ugly, deviating far enough from the norms of her hive that she’s about to be killed when an older, powerful bee steps in to save her life. Flora, she thinks, might be useful; she decides to allow Flora to live on a temporary basis.

As a member of the lowest caste of bees — a sanitation worker — Flora is surprised to find herself in the nursery feeding infants, but that’s just the first twist that’s in store for her. The hive mantra is “Accept, Obey, Serve,” which Flora, devoted to the queen (as are her sisters) tries desperately to follow as she faces dangers both within and without the hive: the vicious Fertility Police, a marauding wasp, and the unwelcome attentions of the hive’s overfed and pampered drones. Flora’s role in the story changes as she grows and learns; sometimes she seems like a Cinderella figure, or a questing knight, or Katniss Everdeen, or Offred. She’s a compelling heroine with six legs and an acute sense of smell — courageous, loyal, fierce, hardworking.

The Bees is not a book suitable for children; Ms. Paull does not shy away from the violence and cruel practicalities of life in the hive (an interviewer suggested that some scenes were reminiscent of Game of Thrones, to which Ms. Paull replied: “Game of Drones!”). The book doesn’t suggests that bees — one of the most complex and successful animal species — survive despite the violence, but that their society in some ways requires it. In fact, some of these scenes are so strange that I thought “there’s no way bees behave this way’; after a little research, I realized, yes, they do. I loved that this book prompted me to learn something outside of my general areas of interest.

While the novel’s environmental message is none too subtle, Ms. Paull does keep the focus on character development and extraordinary descriptions of hive structures and practices from the bees’-eye view. The pacing is brisk and careful, and the bees’ world feels totally new (believe me, you’ll never look at a candle or a jar of honey the same way again). The Bees is an absorbing, imaginative debut, and perfect late-spring reading.