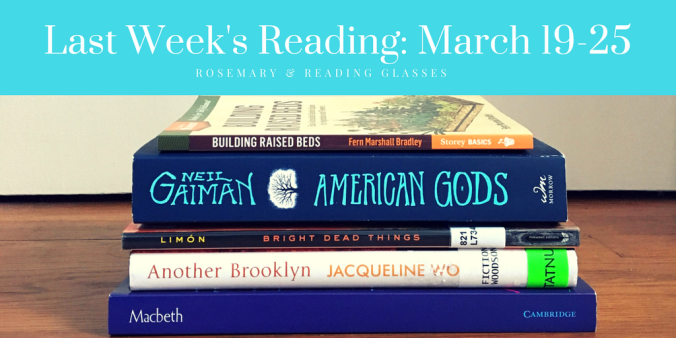 American Gods, by Neil Gaiman: Last week was novel-less, so I treated myself to a re-read of American Gods while recovering from a cold (handy, since the TV show based on the book debuts later this spring). I read the original version eight or ten years ago, and honestly  couldn’t tell you where the 12,000 additional words of the “Author’s Preferred Text” were spliced in. It’s still a rollicking, gory, fun and desperately sad read; I wanted to give Shadow a big hug at the end.

Building Raised Beds, Fern Bradley Marshall: Okay, so this isn’t the most scintillating book I’ve read lately, but it was a decent primer on how to garden using raised beds. I very much want to start a vegetable garden, but I’m not feeling confident about my ability to a) build a raised bed or b) keep my plants alive . . . so maybe I should stick with container gardening? I don’t know. Tell me your favorite gardening books, please.

Is Everyone Hanging Out Without Me? (And Other Concerns), by Mindy Kaling [not pictured because I read it as an e-book]: A light, fun memoir/essay/list hybrid from writer/director/producer Mindy Kaling, who played Kelly Kapoor on The Office and wrote some of its funniest episodes. Though this book doesn’t delve as deep as, say, Amy Poehler’s Yes Please, it’s warm-hearted, self-deprecating, and endearing; if I were going to get a celebrity memoir for my youngest sister (see below), this is the one I’d choose. (Also, to file under “Other Concerns”: I really want to know what Mindy’s best friend Brenda is up to these days—ohmygod I just looked her up and she was Brenda on The Office! But that was like ten years ago so I’m still in the dark.)

Macbeth, by William Shakespeare: I am so very proud of my youngest sister, who just starred as Lady Macbeth in her high school production of the Scottish play. I was totally bummed to miss the performance, so I re-read Macbeth to cheer myself up. (If you’d like to know how it fared in my ranking of all Shakespeare’s plays, you’re in luck.)

Another Brooklyn, by Jacqueline Woodson: I loved this short, beautiful novel about black girls growing up in 1970s Brooklyn. August, the narrator, returns home to bury her father, dredging up memories of her formative years with her best friends Gigi, Angela, and Sylvia. The story is told in fragments and vignettes (to mimic memory, I think), but the novel flows smoothly and feels focused. I closed the book wishing to read more about August, her brother, and August’s work as a cultural anthropologist who studies death. (Sidebar: If you know Ms. Woodson’s children’s books, would you recommend your favorites to me?)

Bright Dead Things, by Ada Limón: Oh goodness, I loved this collection—I don’t know how I missed it in 2015. The voice in these poems struck me—conversational, witty, tough, and tender by turns. I especially liked the sequence dealing with the poet’s stepmother’s final days that focuses on the difficulties of caring for dying people (“The Riveter,” for example, is a gut-punch), but I found poems to love in each of the four sections. Poems about Kentucky and California, Brooklyn and Montana, friendship and lovers, owls and herons, racehorses and dead horses. Highly recommended.