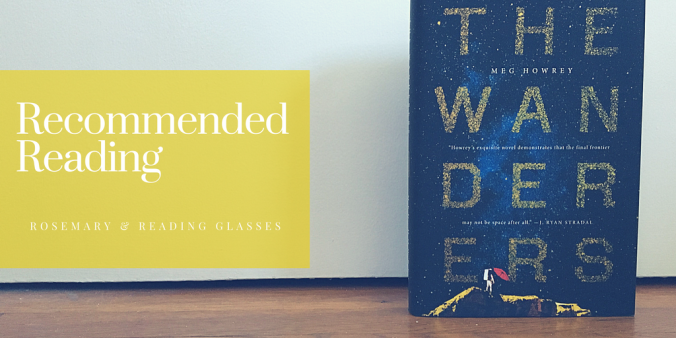 Helen, Yoshi, and Sergei are all hyper-competent professionals, astronauts and engineers who’ve been to space and acquired a taste for it. When private company Prime announces that it plans to put people on Mars, these three people are its first choice for a crew. However, before they can set off for the red planet, they’re assigned a long (year and a half) simulation of the mission, to take place on Earth under the observation of Prime staff. It’s the command performance of a lifetime (“The day Helen stops being tested is the day no one needs her,” she realizes at one point).

While they’re “away,” the people they leave behind—Helen’s daughter, Sergei’s son, Yoshi’s wife—also have roles to play (“proud, happy, and thrilled,” as the astronauts’ wives put it in Apollo 13), despite their mixed feelings about the long separation.

In The Wanderers, Ms. Howrey combines realistic science fiction with fine interior portraiture; the result is mesmerizing. The nitty-gritty of extended living in space (disposable clothing, limited showers, myriad strategies to prevent boredom and relieve tension) is fascinating, showing just how single-minded astronauts are, how prepared they must be both for emergencies and for routine discomfort. It’s equally absorbing to dip into the astronauts’ minds; they are constantly aware of how they’re being perceived, fine-tuning their emotional reactions just as carefully as they would a loose wire or a faulty gauge on their spacecraft:

They are all in extreme close-up; one notices the appearance of a new eyebrow hair. And yet they must communicate as if they are not noticing this. They must protect themselves, from Prime, from one another, from whatever parts of themselves they are grasping in the dark.

Their extreme efforts are worth it because more than anything else, the astronauts want to get back to space, “the perfect thing, the incorruptible thing.”  This is the source of tension with their family members, who both resent and accept the astronauts’ ambitions and their desire to leave Earth. Helen’s daughter, a struggling actress, coaches her mother on how to smooth her affect, even though she felt abandoned as a child whenever her mother left for space. Yoshi’s wife Madoka, a successful businesswoman, isn’t sure she’s ever shown her husband her real self, and wonders if he knows that. Sergei’s two teenage sons are accustomed to long stretches without their blustery, tough father, but Dmitri struggles with the pressure of keeping his sexual orientation a secret; his emails to his father both conceal and reveal his fears.

Ambition and loneliness, family and the drive to explore, surveillance and performance, trust and obfuscation—the novel explores all these themes, and more (it is phenomenal on gender, how Helen pressures herself—probably necessarily—to be above reproach, the perfect astronaut without making it seem as if she’s trying). I loved The Wanderers, and highly recommend it.

15 thoughts on “Recommended Reading: The Wanderers, by Meg Howrey”

© Carolyn Oliver and Rosemary & Reading Glasses, 2013-17. Unauthorized use and/or duplication of this material (text and photos) without express and written permission from this blog’s author and/or owner is strictly prohibited. Brief excerpts and links may be used, provided that full and clear credit is given to Carolyn Oliver and Rosemary & Reading Glasses with appropriate and specific direction to the original content.
Loading Comments...
Comment
×
%d bloggers like this: