I am a person who finds coincidences delightful. (I wonder, are you?)

Not too long ago, I read Kay’s review of Cheerful Weather for the Wedding (which made me think of the opening sequence in Steel Magnolias, and yes, if you were wondering, I am basically a 30-something married version of Ouiser), and therefore ordered it, and then Laura of Reading in Bed put it on her list for Novellas in November, an event she’s doing with founder Rick at the Book-a-Week Project. It was meant to be.

So the novella arrived and I realized that the author is Julia Strachey, who was the niece of writer Lytton Strachey, who is one of the subjects of Christopher Hampton’s screenplay Carrington, which I read a little while ago, whose main subject is the artist Dora Carrington, who painted the author portrait of Julia Strachey on the back (not pictured) of Cheerful Weather for the Wedding. 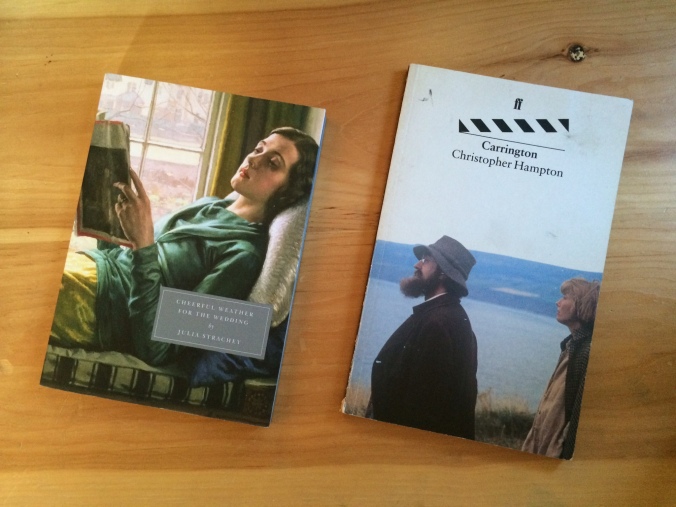 So. The novella first. It is not, it turns out, remotely like Steel Magnolias except for the fact that it begins on the morning of a wedding. In this case, it’s March and a gale is blowing through the Thatcham house and grounds as twenty-three-year-old Dolly prepares for her wedding. Mrs. Thatcham fusses over details, gives contradictory orders regarding luncheon, and fails to notice the general unhappiness of pretty much every person in the house: Kitty, the younger, slightly boorish sister of the bride, Robert and Thomas, young cousins who cannot get along because Tom is bullying the younger boy over his socks, and Joseph, a friend of Dolly’s who’s in quite the rush to see the bride. And then there’s Dolly herself, who’s bracing herself with the better part of a bottle of rum.

It sounds like the set up for a Kaufman and Hart play, but if you imagine Kaufman and Hart done by a combination of Virginia Woolf, Dorothy Parker, and E.M. Forster, you’ll be on the right track. It’s a deeply odd little book, but one that features some fine writing, a nice twist at the end, excellent characterization, and a very interesting motif of carefully depicted light: For example: “sunlight fell in dazzling oblongs” (12), “brassy yellow sunlight” (26) and “dazzling white light” (47) meet green twilight at one point and lilac heat haze (for which I can’t find page numbers). Recommended.

Now, Carrington: I thought this was a play when I picked it up at a used bookstore in Hyannis, but it’s the screenplay to the 1995 film starring Emma Thompson and Jonathan Pryce, which I missed when it premiered because (a) I was 11 and (b) I was repeat-watching Sense and Sensibility, another Emma Thompson flick (I love her). Of course, now I’m dying to see it because it’s about the 1920s Bloomsbury folk and their usually doomed attempts to find happiness within unconventional—-to put it mildly—-living arrangements, and I’m a sucker for 1920s English artistic angst. Also I read Lytton Strachey’s Elizabeth and Essex about seven or eight years ago and wondered mightily about the no-doubt fabulous person who wrote it; here’s part of the answer.

Essentially, Carrington is a story about the difficulty of being romantically interested in someone who can only be platonically (in the modern sense) interested in you. And it’s about gender and sexual nonconformity, art, and family. But mostly it’s about love. It’s gorgeously written and unfortunately impossible to quote out of context, but I highly recommend it. I’ll let you know if and when I find the movie on Netflix.

What about you, Dear Readers? Any bookish coincidences striking you lately?