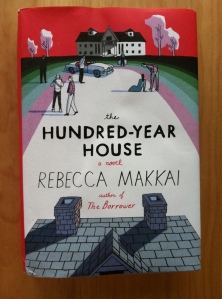 Like Proteus, the mythological figure invoked in one of her character’s poetry, Rebecca Makkai’s The Hundred-Year House* twists and turns, refusing to be confined to any one genre or style. And like Proteus, The Hundred-Year house refuses to tell the future; instead, it charts a way through the past.

The story begins — or rather, ends — with Zee and Doug, a married couple who’ve come to live in the carriage house that belongs to Zee’s mother, Gracie and stepfather, Bruce. Zee, a self-professed “Marxist literary scholar” (as a former-ish academic myself, I loved the intradepartmental sniping at Zee’s college), and her mother Gracie are Devohrs, members of a wealthy Canadian family that built an estate called Laurelfield near Chicago, one hundred years before Zee and Doug’s arrival. One of the Devohrs, Violet, is said to be a ghost who still haunts Laurelfield; a huge oil portrait of Zee’s great-grandmother still hangs in the house.

For about thirty years, Laurelfield was an art colony, and it just so happens that one of its major residents was the poet Edwin Parfitt, the subject of Doug’s research. Doug hopes that access to Laurelfield’s records will force him to finish his book, so that he can get a teaching job, instead of surreptitiously ghost-writing a series for middle-school girls. But there’s a catch or two: Gracie’s none too keen on allowing Doug to kick up dust in the attic, and Bruce’s son and daughter-in-law arrive and upend Zee and Doug’s attempted domestic bliss.

More than enough material for a novel there, right?  Yet Ms. Makkai gives us more: another section follows giving us scenes from Laurelfield in 1955; then another section about the arts colony in 1929; and a brief prologue set in 1900. Each section is written in a different style, and reveals a bit more of the Laurelfield puzzle, which is so tantalizing that I won’t say anything more about it.

Ms. Makkai’s writing is lively, engaging, and crisp, and her pacing is sublime. As I read The Hundred-Year House,  I was caught between the impulse to keep turning pages, impatient to learn more of Laurelfield’s secrets, and the inclination to pause over each page, to note a particularly well-crafted sentence or a telling detail. It’s a marvelous novel, and highly recommended.

Tomorrow: An interview with Rebecca Makkai, author of The Hundred-Year House.

10 thoughts on “Recommended Reading: The Hundred-Year House, by Rebecca Makkai”