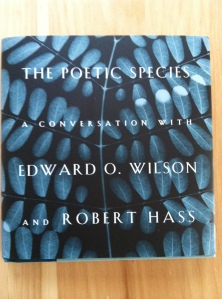 This slim volume — beautifully designed, by the way — is the record of a conversation between two careful thinkers: Edward O. Wilson (better known as E. O. Wilson, perhaps), a biologist famous for his work on ants and his sometimes controversial theories about evolution, and Robert Hass, a highly acclaimed poet, essayist and environmentalist who is a former Poet Laureate.The event — think a long-form TED dialogue — took place in late 2012, was co-sponsored by Poets House and the American Museum of Natural History.

As Lee Briccetti writes in the Foreword to The Poetic Species*, “Poetry is not purely associative. Science is not purely analytic. All skilled human production depends on subtle networks of cognitive capacities and the ability to transition between them” (23). Professor Wilson and Professor Hass came together to talk about the ways that science and the humanities inform each other, and how thinkers in both disciplines might come together to protect the natural world.

The first part of the discussion traces Professor Wilson’s theory of the perpetual conflict embedded in human nature (and yes, the question of “human nature” is, as it’s often maddeningly put in the academy, “vexed”): a tendency toward altruism with regard to members of one’s social group (and concomitant hostility toward outside groups), and the impulse to act selfishly at the individual level. Professor Hass notes, “the dance of the tension between these two things must constitute something of what we mean by consciousness, by the experience of having choice and free will and moral life. A productive oscillation between a social self and a private, individual self, in each person and in the species” (40-41). He goes on to suggest that this kind of oscillation appears in art, between form and departure from form, between what makes us comfortable and what challenges us and makes us uncomfortable.

Professor Wilson, too, emphasizes the connection between biology and art: “I’ve suggested many times that the humanities, and especially the creative arts, are the natural history of Homo sapiens” (48). In his view, “The creative arts are the sharing of our inner desires and humanity’s struggle. The humanities are our way of understanding and managing the conflict between the two levels that created Homo sapiens” (53). Put another way, in Robert Hass’s words: “At a very simple level, poetry can give us someone to talk to. To read is, in that way, to have your inner life acknowledged by somebody else’s” (78).

(As you can probably tell, I’d love to quote great swaths of the dialogue in this review, but then I’d run the risk of quoting the whole book; every page offers something worth contemplating. I’d love to see more collaborations of this kind in print, and I’d happily read another conversation between E.O. Wilson and Robert Hass. While The Poetic Species takes the initial format of Professor Hass interviewing Professor Wilson about his work, and works from that point, I’d like to read another conversation in which Professor Wilson questions Professor Hass about the natural elements in his poetry (which is deeply rooted in the environment of northern California). Given Professor Wilson’s admission, in his own list of suggested reading, that he does not read literature for its own sake, perhaps this is wishful thinking.)

The last third of The Poetic Speciesis an impassioned plea for conservation of wildernesses, a plea to take the initiative to save places and species that are in danger of disappearing. Wilson says, “I’m spending more and more of the time I have left on national parks” (67). Both men encourage education of young people in both biology and the humanities to promote environmental stewardship; Wilson suggests that education should go beyond facts and terms — “it’s somehow got to be made into a story” (76). Common Core creators, take note.

Reflecting on elegant solutions in math and sciences, Hass says, “Beauty sends out ripples, like a pebble tossed in a pond, and the ripples as they spread seem to evoke among other things a stirring of curiousity. The aesthetic effect of a Vermeer painting is a bit like that. Some paradox of stillness and motion. Desire appeased and awakened” (79). That’s how science and poetry work — we solve one problem, come to one possible solution, and another question presents itself — like endless webs that spin outward and outward to gather us all in.

The Poetic Species is a fascinating foray into the ways we’re connected to each other and the natural world — highly recommended reading.

*My thanks to the publisher for sending me an advance review copy of this book in exchange for an honest review.

15 thoughts on “Recommended Reading: The Poetic Species: A Conversation with Edward O. Wilson and Robert Hass”