Yesterday I reviewed Sea of Hooks, Lindsay Hill’s first novel, which was published in 2013 by McPherson & Company. Mr. Hill graciously agreed to be interviewed via email. 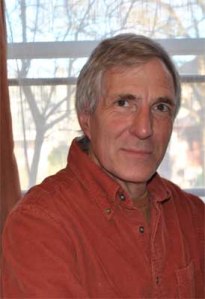 How and why did you begin to write Sea of Hooks?

LH: The book was begun on a trip to Bhutan in 1994.  I was traveling with the poet and anthropologist, Nathaniel Tarn, and carrying a notebook.  My intention had been to make a limited written record of the trip and to record any thoughts or lines (for possible poems) that came to mind.  During the course of our travels, we learned of the Terma Tradition within the Nyingma school of Buddhism.  This tradition concerns the scattering of Terma (spiritual treasures) in earth, water, air and mind, for future discovery, in proper sequence, by treasure–finders called Terton.  I was spellbound by the beauty of this tradition and by the idea that such treasures lay hidden among us, waiting to be discovered.  As we traveled through the stunning Himalayan landscape, I started to write the outlines of a story. From the beginning, the themes were going to include the emergence of compassion and the spiritual transformation of a traveler.  Even so, having written only poetry, I had little idea of how to proceed.

LH: The trip to Bhutan, completely inadvertently, began a new phase in my life as a writer.  I began to carry, and fill, small notebooks with thoughts as they occurred to me.  This was very different from sitting down to write, or intending to compose, a finished poem.  I found that I had embarked on the composition of a continuous open text.   Very soon, I began titling the individual entries and letting the threads find their way.  Perhaps because I am severely dyslexic, I subvocalize everything I read.  Also, I am only able to read very slowly.  This combination of conditions led me, very early on, to a passion for reading poetry.  Every concussive syllable, every shifting rhythm, every lyric leap, enthralled me.  At Bard, where I was lucky enough to go to school, I started with Middle English (The Pearl Poet and Chaucer), and finally arrived at the 20th century in my senior year.  In essence, I apprenticed my ear to the arc of great poets in English, and a bit of that rich tradition couldn’t help but rub off!  So, in writing anything, I find myself attentive to sound and rhythm.  Also, I like the difficulty and the challenging associative leaps that often occupy the best poems.  Combine these preferences with my short attention span, and you end up with a novel of titled fragments that carry, at least to some degree, the stylistic characteristics of poems.  The difference lay in the particular demands that the novel, as an artistic form, places on any writer.  The necessities of finding and sustaining “voice” over an extended text; the demands of constructing a compelling plot; the challenges of developing plausible characters; all of these were extremely daunting to me, and any success that I had took hundreds upon hundreds of pages of missteps.  Ultimately, what I hope I was able to accomplish with Sea of Hooks, is a genre–spanning work that employs poetic methods, and architectures, to strengthen narrative structures.  Certainly, this is nothing new or unique, but for me, it was an entirely marvelous adventure of learning how a story could become the wetting stone of lyric language.

I understand that you composed Sea of Hooks over a period of more than twenty years. When you began the work, did you think or know that so much time would pass before it would be finished?

LH: I had no idea.  Originally, I intended to write a simple story.  Eventually, I had to be willing to be completely, even relentlessly, patient as complexity intervened.  Especially in the last eight years of its composition, I was working every day on the novel.  It was a completely joyful enterprise, and I was honestly unconcerned with when it would wrap itself up.  Many times, I truly doubted that it would ever “come together.”  By the time I started editing, I had over 5,000 titled sections from which to select and with which to assemble a coherent book.  The editing took three years and, in the final year, I did no other work.  Basically, four out of every five “sections” were thrown out.  Clearly, I’m not a very efficient novelist!

One thread in the narrative finds Christopher exploring Bhutan and Buddhism. How did you come to this choice?

As mentioned above, this thread originated with my trip to The Himalayas and with my learning about the Terma Tradition.  Christopher, the book’s protagonist, is following an inquiry into how a shattered world can be reassembled.  Everything is at stake for him in this.  Philosophically, Buddhism has much to say about the topics that preoccupy his thinking: the nature of the construction of the self, the puzzle of desire and suffering, the meaning of emptiness and liberation.  One of the book’s central images, that of a mother running armless beside a river where her child is drowning, came from Patrul Rinpoche’s The Words of My Perfect Teacher, and is among the most powerful I’ve ever encountered.  In Rinpoche’s teachings, this image represents a paradigm of compassion: not simply as empathy, but as the practice of staying steadily with suffering that cannot be fixed.  Through the lens of Christopher’s experience, this understanding is key.  So, Buddhism had an extremely generative affect on my thinking and writing and, above all, on my ability to perceive, from the heart, the possibilities that suffering offered for transformation in Christopher’s life.  Of course, Sea of Hooks is a story, and in no way presumes to be a scholarly explication of Buddhism or to reveal the depths of its great traditions.

Which writers do you read while writing? Do your reading choices change depending on the writing project at hand?

LH: I still, primarily, read poetry.  While writing Sea of Hooks,  I spent time with a wide range of work, from Donne’s Satires (...as streams are, power is...) to Gerard Manley Hopkins (…like shining from shook foil…), to the works of contemporaries like Tarn (The Beautiful Contradictions, Ins and Outs of the Forest Rivers), and Palmer (Six Hermetic Songs, Thread), and many younger poets as well.  Also, I read a good deal of philosophy, from the Pre–Socratics to Wittgenstein.  Mostly, I like to read work that poses interesting questions and that approaches them in innovative ways.  I like to read work that takes risks.  This doesn’t really change depending on what I’m writing but I do try to avoid work that may offer “solutions,” to questions I’m wrestling with in my own writing.  I like to stay with difficulties until they reveal their own underpinnings; their own “ways out.

What kinds of writing projects are you planning next?

LH: I strongly believe that a writing project deserves to have authentic urgency behind it: something at risk for the writer in writing it, and for the reader in reading it.  At least for me, that urgency, that necessity, isn’t something that can be “put” into a work.  It’s not an “ingredient.”  It’s the ground from which the work grows, and around which it organizes itself, as it takes shape, and strives to inhabit a living space.  Sometimes you just have to wait for that urgency to arrive.  In the meantime, my intention, and practice, is to maintain a constant relationship with writing.  This means that I continue to keep a small notebook in my back pocket and write as often as something of potential interest occurs to me.  I do this without any expectation that my jottings will be “good,” or used later in any way.  It’s just a practice to keep the dialogue open with my work.  The result has been that I have a joyful and relaxed approach to writing.  All that aside, I have, with some trepidation, started a new novel.  I envision a simple story…

My thanks again to Mr. Hill for sharing his time and generous answers.

6 thoughts on “An Interview with Lindsay Hill, Author of Sea of Hooks”