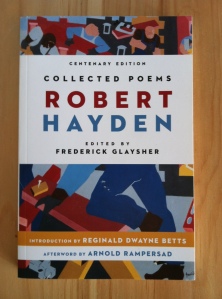 Robert Hayden’s “Those Winter Sundays” is often anthologized, and deservedly so. A moving meditation on parents and children from the not-so-safe remove of adulthood, the poem reaches its plaintive, universal question in just three stanzas.

In the first stanza, the rhymes and alliteration (“weekday weather,” for instance) underscore the repetitiveness of the speaker’s father’s labor (“Sundays too my father got up early” [emphasis mine]); this father doesn’t rest even on the traditional day of rest.

In the second stanza, the “I” appears; the speaker includes himself in those who never thanked his father for his efforts. The same stanza, though, undercuts the father’s act of kindness, since the child fears “the chronic angers of that house.” The sense of icy brittleness expands — hard “c” sounds repeat throughout the poem — to encompass not only the winter cold, but also the chill of strained familial relationships.

The third stanza turns again, as we learn that the speaker’s father not only warmed the house, but polished the boy’s good shoes, presumably for church, an image meant to echo, I think, the biblical story of Christ washing the disciples’ feet. Our knowledge, built on the adult speaker’s point of view, that the father performed these acts of love alone and unthanked — whatever his faults may have been — brings us to the final couplet, in which the speaker asks what we all ask of ourselves at some point, thinking of those who care for us:

9 thoughts on ““Sundays too my father got up early””