I was nearly halfway through pregnancy at this time three years ago, and I remember feeling the baby kick for the first time around New Year’s Eve, which was also the same time I was reading one of the three books I strongly associate with being pregnant.

Reading while pregnant isn’t really different from reading while not-pregnant, I found, except I felt I should be more discriminating since I wouldn’t read as much right after the baby was born (true, in my experience), and also because I had to get up a lot more often. And while I generally remember my reading lists pretty well, most of the books I read during those many weeks went by in a haze, though I know there were quite a few. I was teaching intro-level Shakespeare and Readings in Drama at the time, so that’s a dozen right there, and of course I read novels and poetry on the side. Looking back, though, these are the three books that epitomized the whole experience of pregnancy for me.

One is the ubiquitous What to Expect When You’re Expecting, which was so awful and made me cry so often that my husband hid it from me around the end of the first trimester (for which I am profoundly thankful). Seriously, it’s the worst: fat-shaming and fear-inducing for starters. If you’re a pregnant person, there are far better options out there (try the Mayo Clinic Guide to a Healthy Pregnancy for the nitty-gritty health stuff, and the Girlfriends’ Guide to Pregnancy for the “we’re-all-in-it-together” vibe, although if you read my edition from the late ’90s you’ll have to squeeze someone’s hand through the parts that hurt [ahem, assumption of shared privilege, ahem]).

The second is Wuthering Heights, which is the first book I read on an e-reader. My husband got me a Nook for my birthday about a month after I found out I was pregnant. Though I’ll always be a lady of the printed word (mostly because I like books as objects, and my eyes hurt when I look at screens for too long, but we can have that tussle another day, if we must), it did make reading one-handed while standing quite easy (also: great for reading while nursing).  On the train and the bus to and from the university, I read about the unkindnesses that Cathy and Heathcliff inflict upon each other, and the harsh beauty of the moors. It wasn’t particularly uplifting, but it was distracting enough that for those forty-five minutes each way, I didn’t notice the sciatica or general discomfort associated with growing another human in one’s abdomen. And that’s all you  want from your pregnancy reading sometimes: distraction.

[It should be noted, here, that I am of the variety of plumpness that made it difficult for people to tell whether I was fat or fat and pregnant for the first twenty-seven or so weeks out of my forty-two (yes, it was awful) weeks of pregnancy. People in Boston aren’t jerks who don’t offer seats to pregnant women. For the most part.]

The third book I associate with pregnancy, the one I was reading when the baby started kicking, is Harry Potter and the Sorcerer’s Stone.

Now, I came very late to the Harry Potter fan club; the books started to appear when I, as a young teenager, thought that Ayn Rand was the height of reading sophistication. (As you can tell, my salad days have come and gone.) When the Harry Potter movies came out, my dad and I would go see them on a Monday at the Shaker Square Cinema for five bucks a ticket, with free popcorn (we’re yankees to the core); we liked them quite a bit. As it turned out, I saw all the movies with my dad, eventually. But for many years we eschewed the books as “kid stuff.”

It wasn’t til I was pregnant that I decided I should read the series to preview it for the baby, figuring, perhaps wrongly, that kids in the 2020s will be reading the same stuff as kids in the late ’90s and early ’00s. It tells you something about my reasoning ability that I thought I should preview books meant for kids 8 and up while I was still pregnant. It’s not just me, though: Pregnancy does weird stuff to your brain.

My nesting instinct pretty much came down to books: The shower was book-themed (thanks, bookish friends!), and I bought (or borrowed/stole from my siblings) every children’s book I remember loving, from Miss Rumphius and The Story of Ferdinand all the way up to the Chronicles of Narnia and Charlotte’s Web and Anne of Green Gables — without reflecting that it would be years before the baby would be big enough to understand them.

I read that first Harry Potter book and immediately ordered the set. I read them so fast that winter (three years ago now) that the plots spun together, thrilled that these were books my baby would someday, barring catastrophe, grow up to read. They might be built of the fantastic, but they made all the promise of childhood after the misery of pregnancy seem real and attainable, and I loved them unabashedly and in earnest.  While I’m not exactly sure I’m ready for our son to grow up, I can’t wait to read the books to him for myself (Mr. O read the first three to him to get him to sleep as an infant). Privet Drive is going to make his chores look easy, and even I would take gym class over Potions with Snape. Wait. No I wouldn’t. Scratch that. Sorry, kiddo. Gym class is the worst. 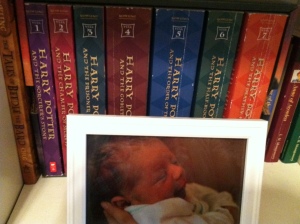 Turns out that I’m impatient, so I read the whole series again over the Thanksgiving holidays, and whoa, nelly. They’re still wonderful, inventive while nodding to and borrowing from the best in other fantasy novels, and heartbreaking.

I didn’t know, the first time I read them, that our Baby O would be a son, but this time I couldn’t help but picture our little dude as a kid away from home, navigating the tricky staircases at Hogwarts, maybe making friends like Ron and Harry, and especially Hermione.

This is a your weekly poetry post, I promise, even though it’s taken me awhile to get here. This week we’re saying hello to a new year, and so please head on over to The Poetry Foundation to read Diane Di Prima’s “Song for Baby-O, Unborn.”

It’s the kind of poem that I imagine would have crossed Lily Potter’s mind sometime. It reaches for the future with eyes wide open to the deficiencies of the present, and the tangled power that is love.

12 thoughts on “Reading While Pregnant: Or, “enough to love / to break your heart / forever””