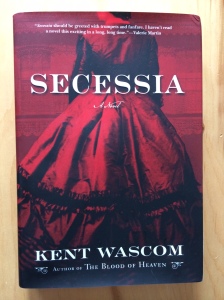 In its first few pages, Kent Wascom’s Secessia,* which is out today, seems like an ode to to Edgar Allan Poe: a teenaged girl walks into a crowded masquerade with blood—not her own, it turns out—trickling down her chin. This is not your average Civil War novel.

Seldom have I read a book whose language evokes so well its setting. Mr. Wascom’s long, adjective-rich sentences sink the reader into 1862 New Orleans, a city slowly going mad with heat and hatred, a “new and wild world” on the brink of capture by Union forces.

The word that immediately leapt to mind when I started reading was “baroque”; the sentences are so over-populated with sound and imagery that they should topple under their own weight, but Mr. Wascom balances them expertly in brief chapters that propel the narrative inexorably forward. Here’s a small sample of the kind of language I’m talking about:

Thrown back upon the hands that have him hoisted high, an officiate of a ceremony of extraordinary violence, with boot heel he pulps one face, then another whose spouted teeth fall like wedding rice on her husband’s black coat; two of his bearers drop at Elise’s feet, and she has rushed too son, come to close, must spin and duck the whirligig of mayhem of which her husband is a master component. (33)

In this passage, Elise is searching for her son in the chaos of the city as the Union forces approach. Her much older husband, Angel Woolsack, was a major character in Mr. Wascom’s debut novel, The Blood of Heaven (which I haven’t read, but which received excellent reviews), and based on what we learn of him in Secessia, he sounds like he’d be right at home with most of Cormac McCarthy’s creations.

The novel’s point of view shifts among Elise, a mixed-race woman who passes for white; her only son, twelve-year-old Joseph; Marina Fandal, a Cuban orphan rescued by Union soldiers who takes an interest in Joseph; Emile Sabatier, a prominent doctor obsessed with disease and the girl he met at the masquerade nearly twenty years earlier; and General Benjamin Butler, the man who’s come to take charge of the city, and who will soon be called “the Beast.” Through their eyes we see New Orleans in a year of tremendous upheaval, which will affect them all.

New Orleans (and the South in general) is absolutely not romanticized in this book; it’s a morass of darkness, greed, and hypocrisy. Still, we don’t hear directly from any of the city’s enslaved residents, though certain household servants appear from time to time. Maybe that’s because Mr. Wascom is making a point about how only certain people’s voices were heard (Elise’s is heard because she passes for white), but I think the book would have been stronger if the author had turned his considerable talents in, say, Ligeia’s direction (perhaps she’ll appear in his next novel).

If you are a reader of historical fiction, or searching for a book that’s utterly different from everything else you’ve been reading, or want to start early with an author who’s going to be a master one day, look no further than Secessia.

Boston readers: Kent Wascom will be at Newtonville Books this Thursday, July 9, at 7p.m.