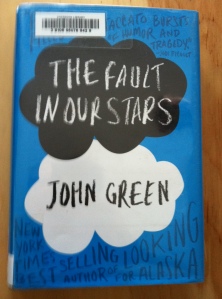 I realize that I may be the last literate person to have read this novel since it was published two years ago this month. Generally speaking, I try to avoid anything filed under “What Teens Are Reading” at Barnes and Noble (yes, I was in there exchanging things), despite my occasional forays into YA. But The Fault in Our Stars has been so widely acclaimed that I felt safe joining the library wait list.

Sidebar: Was the term “YA” around when we were younger? I’m 29, for the record, and I don’t remember seeing “YA” as a teenager, although it’s possible that I missed it because I was pretentious enough then to turn up my nose at a wide swath of literature (What’s that you say? I’m still pretentious? I don’t want to bite my thumb at you, but . . . ) and hated being categorized as a “teen.”  I did read a bunch of Judy Blume novels in grade school (Yes, grade school. My second grade teacher couldn’t figure out what to do with me during class reading time, so she handed me Are You There God? It’s Me, Margaret. I was really confused, and a search through the bathroom cabinets didn’t help much.) I remember leafing through them in the library —  to this day, I can’t really keep a straight face around anyone named Ralph — but I don’t remember how I found them.

My point, which got lost somewhere in there, is that I don’t see Forever .  . . (don’t worry, didn’t read that one in second grade) shelved near the Boyles and Byatts these days, and maybe that’s a trend that’s been around for awhile. Then again, sometimes I can’t find Neil Gaiman books anywhere except the SF/F fantasy section, so maybe we should all band together and protest the isolation of genre fiction. Or do separate genre markers make it easier to find something along the lines of what you like?

Spoilers Ensue. You have been warned. I’ll let you know when it’s safe to read again.

I loved The Fault in Our Stars, even if it meant that I started my New Year by sobbing all over my favorite sweatshirt and causing my two-year-old to worry about Elmo’s health. It’s a testament to the writing that I knew just what was coming by page 18 (“Osteosarcoma sometimes takes a limb to check you out. Then, if it likes you, it takes the rest.”), but I still wanted to keep reading. Hazel and Augustus are hilarious, winning characters, perfectly imperfect, precocious but never precious. The book treats people with illnesses as people, which is rarer than it ought to be, and I thought the medical issues were handled well.

Here’s where the book first won me over: “There is only one thing in this world shittier than biting it from cancer when you’re sixteen, and that’s having a kid who bites it from cancer” (8).  It’s the rare adolescent-centered book that fully acknowledges the burdens of parents, and this is one of them. I happen to be personally conversant with untimely death, and now, as a parent, I can tell you that, yes, being the parent would be worse.

I wonder, and I’d be pleased to know if you have the answer: Is this book as popular as boys as it is with girls? I know that it was mostly girls who read Twilight (tried some of that in an effort to get to know my students’ tastes: disaster.), but I can see how The Fault in Our Stars would appeal to boys, too.

As I read, part of my mind was engaged thinking about texts that I’d teach with The Fault in Our Stars, since it’s a commonly-read book among high school students and people entering college. It’s a dream of a book for English nerds, with tons of discussions about metaphors and books; Laura at Reading in Bed has a great post on the allusions in the book (and I agree with her critique about the sex scene too).

Here’s a short list of books that I think would complement The Fault in Our Stars, not just from a teaching standpoint, but from a general reader’s standpoint too.

W;t, by Margaret Edson. A play about an English professor dying from ovarian cancer. Brilliant, beautiful, full of John Donne. I’ve taught it three or four times, and college students (freshmen to seniors) have loved it. There’s quite a bit here about how the medical establishment dehumanizes patients, and I think the de-emphasis on hospitals in The Fault in Our Stars would provide a good counterpoint and spur discussion about lenses in literature.

Gain, by Richard Powers. The best novel about cancer I’ve ever read (sorry, John Green). It’s dense, engaged with history and what it’s like to be human and sick. It both is and is not historical fiction, environmental fiction.

Never Let Me Go, by Kazuo Ishiguro. If you missed this book, go read it immediately. It’s stunning. I won’t give away the plot because it’s so exquisitely rendered. Like The Fault in Our Stars, it features young adults facing circumstances entirely out of their control, and navigating though first loves at the same time.

What would you add to the list? What did you think of The Fault in Our Stars?