How would you describe the inception of Off Course? What was the writing process like? 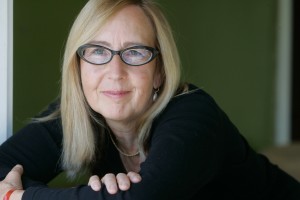 MH: As often happens with me, I started out with one book in mind, but another one happened.  I had wanted to write a novel that charted a woman’s life from childhood to a version of stable adulthood with some years en route spent lost to trouble. Well, that book didn’t happen.  In Off Course, I started right where my heroine,  Cressida Hartley, at age 28, turns off the beaten path.  She’s at a perilous, vulnerable stage, when she’s done with school and about to set forth in life.  She should be settling into a career and making at least general decisions about marriage and family. But first, she has to write her dissertation. For whatever reason, she can’t get going on it. She just can’t.  She makes herself ever-available to distraction and gets lured away from her friends, family, and self. Or, to quote the epigraph, “demons arrive singly and in droves, often taking the form of men.”

In terms of process, I  tried something new with Off Course, which was to write a certain number of words a day. 1000, I think, which is a lot. Too many.  This was not an effective method for me.  To meet my daily goal, I wrote a lot of dreck, some of which stuck to the book for a long time and interfered with plot and shaping. Also, I had to go back and fix every damn sentence. Did forcing myself to produce at such a rate prove a worthwhile exercise for my imagination?  No.
The setting for much of the novel sometimes seems like another character in Off Course. How did you decide to set the novel in the Sierras?

MH: My parents had a cabin high up in the Southern Sierras, so it was a geography and community with which I was deeply familiar. I went up to the cabin as a kid, although not with the strict regularity that Cress’s parents dragged her to their A-frame.  I also lived in our cabin briefly when I was trying to write my first novel.

I disliked going to the cabin as a child; I appreciated the landscape more when I lived there as a young adult, even though that wasn’t the happiest time of my life.  But I loved going back there in my mind all the years and months that I was writing Off Course.  The landscape, with its rocks and trees, trails and wild animals, was all there in memory, just waiting to be closely observed.

I did try to go back to the area a few years ago to do research for the book, but a freak snowstorm in May forced me to turn back at 6000 feet.
Cress’s graduate work is in economics, and her dissertation focuses on art in the marketplace. Are readers meant to think of the mountainside community as a kind of marketplace, too, with commodities beyond those merely bought and sold?

MH: The mountain community certainly had its own a singular, improvisational economy. It was tricky for anyone to make a living up there, but then again, for some of my characters, it was the only kind of place where they could make a go of it. The developer of The Meadows was a here-today, gone-tomorrow drunk, but because he was the only person selling property up there, customers had to deal with him.  The fellow who ran the lodge (who charged customers whatever he felt like) and the contractor who built vacation homes (and sometimes overran his bids by more than 100%) could not have stayed in business had there been any, more viable businesses to compete with them.

To get closer to your question— this community seems to be a place where all bets are off.  There’s a whiff of the numinous, of ether, a high altitude queasiness and an out-of-time holiday hilarity that allows certain emotional and financial transactions to occur there, antics that might be out of the question at lower elevations.  One of my readers happily described life on the mountain as “an all day sex party.” Another described it as “an erotic eden.” Both comments point to a rarefied atmosphere where there’s a certain relaxation of inhibitions and a willingness to work the margins of romantic possibility.

Readers may not know that in addition to being a novelist, you’re also a journalist and food writer. If you were choosing a meal to complement a reading of Off Course, what would be on the menu?

MH: Oh gosh—nothing very good for you! We’d start with a bowl of pozole: a clear fragrant broth made from pork, chicken, and chiles, with bits of meat and  plump multicolored kernels of hominy.  Dinner itself would be a pot roast simmered all day in beer with masses of onions.  I’d serve it with chard or kale sauteed—just this once–with bacon.  There would be buttermilk biscuits with sweet butter and a green salad dressed with local olive oil—although to be truer to the spirit of mountain life, you’d probably toss it with that weirdly-flecked Wishbone Italian dressing that’s been in the refrigerator door for at least two years.  Dessert would be peach cobbler made from Bisquick and canned peaches served with ice cream that is slightly crystallized, from melting a bit on the long drive up the mountain and then living too long in a freezer.

What’s a question you hope readers will take away from Off Course?

MH: Is a great, passionate, all-consuming, sometimes-rapturous, obsessive love—a love that could hijack years and potentially cause scarring, if not real damage to its players—something to be desired?  Is the experience worth the pain?

My husband says this question is too one-sided, but he underestimates the romantics among us.

What kinds of writing projects are you planning next?

MH: I have been writing short stories for the past year and a half.  Recently, I’ve started two books, one a historical novel about a brilliant but wrongheaded scientist who once lived on my property and the other a novel about a church and its search for a new minister.  Both take place close by to where I live, in beautiful Altadena, CA.

My thanks again to Ms. Huneven for her time and wonderfully generous answers. You can read more about Ms. Huneven, and Off Course, on Ms. Huneven’s website, www.michellehuneven.com. Follow Michelle Huneven on Twitter: @MHuneven

Cressida Hartley, a graduate student in economics and a casual artist, has retreated to her parents’ A-frame in California’s Sierras to finish her dissertation, a venture that she hopes will take a few months. Instead, it’s years before she comes down off the mountain, years in which she veers both slightly and wildly off course from the life she had planned.

Michelle Huneven’s fourth novel, Off Course* is a delicate character study, one that is deeply rooted in setting. Like her Shakespearean namesake, Cress is at times difficult to like, but always believable, always human — flawed and interesting. Her dissertation languishes while Cress is willingly seduced by the jolly (and non-monogamous) owner of the local lodge, a gathering place for the mountain’s residents and visitors. This affair, quick to to start and quick to finish, would have necessitated only a minor course correction on Cress’s part — but then she meets an intriguing — and married — carpenter.

This is the sort of affair that serves as the backstory or the amusing antics of the best friend/sidekick in romantic comedies, but Ms. Huneven spins the relationship into a masterpiece of characterization. What seems incomprehensible — why an intelligent, feminist, career-oriented woman would spend years of her life on a man who’s often emotionally unavailable and always married — is made comprehensible by the way the novel tracks Cress’s decisions and delays, the disturbances in her understanding of herself. Though she’s an economist, Cress neglects the cost-benefit analysis that could save her grief; and yet, how does one put a price on love?

What I loved most about this novel was Ms. Huneven’s attentiveness to the setting. The land, the sky, the weather, the animals of the Sierras — all seem to seduce Cressida just as much as the men who live on the mountain. If she were a professional artist, she thinks, she would have wanted to work in landscapes. The double edge of the landscape’s isolation and consolation slices through Off Course, exposing not only the tradeoffs Cress makes, but our own concessions to love.

Tomorrow: An Interview with Michelle Huneven, Author of Off Course

*My thanks to the publisher for sending me an advance copy of this novel in exchange for an honest review.