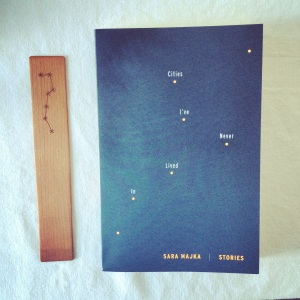 Sara Majka’s Cities I’ve Never Lived In* is a collection of stories profoundly concerned with isolation, so much so that at times I felt almost too distant from the action and the characters. Still, I was impressed by these glimpses of other lives, and impressed by Ms. Majka’s ability to seamlessly blend fiction and autobiography. The narrator of many of these stories is divorced and rather adrift; she collects stories as a way to connect. The people we read about are in many cases scraping by: a man who abandons his daughter in northern Maine when he can’t find work in their town; an artist who sells a piece he doesn’t have any right to sell; an grandfather looking after his grandkids while their mother works a ferry ride away. (It’s not a coincidence that islands feature prominently in the collection).

There are unsettling stories. People go missing; a whole island disappears; a young woman drowns. I sometimes felt as if I were reading through a mist, that Ms. Majka’s simple but subtle prose had lulled me into thinking I could easily understand these characters and these places. But that wasn’t the case.

I thought that instead of an extended review of Cities I’ve Never Lived In (you can read one here and another here), I’d try to give you a sense of it by recommending (somewhat) related works.

If you were to pair Cities I’ve Never Lived In with a painter, the immediate choice would be Edward Hopper. Though best known for Nighthawks, I’ve always preferred his stark New England Landscapes (like Hills, South Truro, held at the Cleveland Museum of Art) and his portraits of women in isolation, like Morning Sun, held at the Columbus Museum of Art).

Richard Russo’s 2002 collection The Whore’s Child and Other Stories came to mind when I read Ms. Majka’s descriptions of life in economically depressed Maine. Mr. Russo is a chronicler of small-town New England and New York (state); if you liked the settings of Cities I’ve Never Lived In and are looking for stories with a different feel (more drama, varied narrators), you might give this collection a try.

And here’s the oddball of the bunch: Lost in Translation, the 2003 movie set in Tokyo that stars Bill Murray and Scarlett Johansson. Chances are you’ve seen it—I don’t know many people who haven’t—but the main narrator of Cities I’ve Never Lived In makes me think of Scarlett Johansson’s wandering and wistful Charlotte, and both works are explorations of loneliness and the impermanence of connection.

If you’ve read Cities I’ve Never Lived In, what other books or artwork did you connect it with?