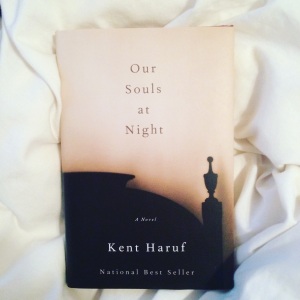 I’m so pleased to report that the first book I read this year is Kent Haruf’s excellent (and sadly, last) novel Our Souls at Night. Set in his fictional town of Holt, Colrado (the setting of his earlier novels, which I will now be adding to my reading list), the story begins when a widow, Addie, makes her neighbor Louis (a widower) an unusual proposition: come spend the night with her, so that the both have someone to share the darkness with.

Though wary of talk in their small town, Louis agrees, and sure enough, the small community is set abuzz by what it’s presumed Louis and Addie are up to (but what is, for the bulk of the novel, holding hands and talking). But neither Addie nor Louis is willing to alter their arrangement for appearance’s sake.

The arrival of Addie’s grandson Jamie does bring change. After his parents’ arguments and separation, the boy is lonely and often frightened, but Addie and Louis minister to him with calmness, routine, and simple pleasures: softball games, camping, the observation of tiny mice. When Addie’s son returns for Jamie, however, Louis and Addie find that his disapproval means more than their neighbors’. 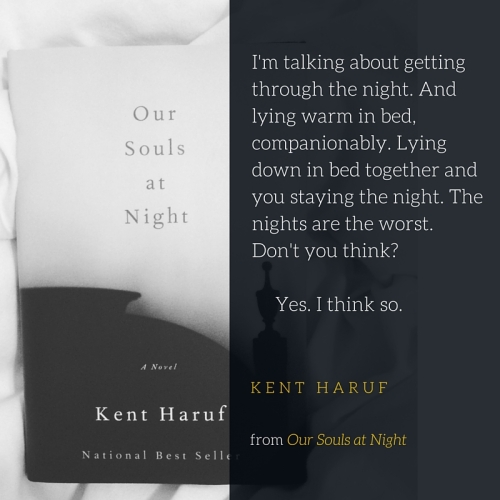 The story and style of Our Souls at Night are deceptively simple. Chapters and sentences tend to be short, and you’ll find few polysyllabic words, but so much is going on beneath the surface and in silences that it’s impossible not to recognize the incredible skill of a master writer. The novel reads quickly, gliding along smoothly until a line or an image snaps into focus, arresting momentum.

Apart from its style and simplicity, I loved this book for its focus on two main characters navigating the transition from late middle age into old age (Addie and Louis are about 70). So refreshing. While Our Souls at Night is set in the present (Jamie has a smartphone to call his mother), Addie and Louis’s world feels timeless, especially since they do things at a slower pace than that typically required by modern consumerism. As you might suspect, there’s quite a bit of nostalgic Americana in the book (fried-chicken picnics, men chewing the fat at a bakery; I love the detail of Louis carrying his pajamas to Addie’s house in a paper sack), but it’s not the treacly sort, since Addie and Louis’s old-fashioned routines are accompanied by the old-fashioned attitudes in Holt.

Our Souls at Night is highly recommended.

Have you read this book or any others by Kent Haruf? What did you think?

13 thoughts on “Recommended Reading: Our Souls at Night, by Kent Haruf”