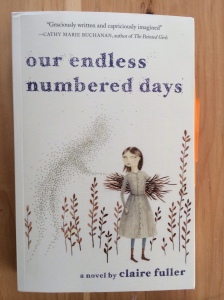 I first learned of Claire Fuller’s debut novel Our Endless Numbered Days* from Naomi’s review on Consumed by Ink. Once I picked up the book, I couldn’t put it down.

In reading Our Endless Numbered Days, I stepped  outside of my comfort zone; my reading (and viewing, for that matter) bête noir is child endangerment, and Peggy Hillcoat is in danger for quite a lot of the novel.

In 1976, when Peggy is eight, her father, a survivalist, packs up supplies and Peggy and leads her deep into a German forest, to “die Hutte,” where the two will live for the next nine years. Peggy’s experiences in wild living are juxtaposed with chapters about her life after she rejoins her mother, Ute, a noted concert pianist, in London nine years later (and this was what allowed me to read the book: knowing that she would come home alive, if not unscathed).

Peggy’s father tells her that they are the only two people left in the world, and decides to stop keeping track of time:

“We’re not going to live by somebody else’s rules of hours and minutes any more,” he said. When to get up, when to go to church, when to go to work.”
I couldn’t remember my father ever going to church, or even to work.
“Dates only make us aware of how numbered our days are, how much closer to death we are for each one we cross off. From now on, Punzel, we’re going to live by the sun and the seasons.” He picked me up and spun me around, laughing. “Our days will be endless.”

So Peggy—or Punzel, as she takes to calling herself and being called—settles into a routine of hunting and gathering and playing one piece on a piano that doesn’t make a sound—until one day she sees a pair of boots in the woods and begins to understand that all is not as her father told her.

Given the lies that James and Ute tell themselves, their daughter, and each other, Peggy isn’t the most reliable narrator—except where matters of practical living are concerned. The details of Peggy and James’s survival strategies are fascinating, particularly considering just how much effort it takes to learn how to live primitively (I just read a NYT story on a woman who walked 10,000 miles in three years, so I guess I’m on a bit of a kick). Their struggles do not recommend the outdoor lifestyle (though maybe I’m biased, since my favorite magnet says “I love not camping.”)

Ms. Fuller’s writing is strong and assured, her words gliding gracefully; I finished the book in two sittings. She skillfully builds tension as the novel’s twin mysteries unravel: How (and why) did Peggy escape the wilderness? And why did her father leave with her in the first place?

Once you pick up Our Endless Numbered Days, these questions will draw you into Peggy’s world, and it’s difficult to leave.

*I received a review copy of this book from the publisher, which did not affect the content of my review.