Recently, I had the unusual experience of reading a book that didn’t really work for me as a whole, but that also ensured I’ll read the author’s next book. 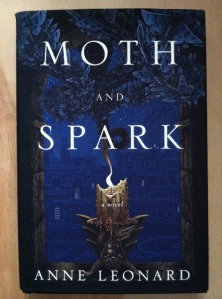 The author is Anne Leonard, and the book is Moth and Spark*.  Here’s the summary from Ms. Leonard’s website:

For three years, Prince Corin of Caithen has been waiting nervously for the Sarian army in the east to invade his kingdom. Now it is finally happening. But there are gaps in his memory and blank spots in his mind, his father is keeping secrets, and the Emperor’s dragons appear to be spying. The Empire which should protect Caithen may even be allied with the Sarians. If all that weren’t enough, the pressure is on for him to get married.

While Corin faces a world gone awry, Tam, the commoner daughter of a respected doctor, arrives at court as the guest of her sister-in-law. It is the season for making matches, but Tam has not come husband-hunting; she is insatiably curious about the court instead. Trying to control her impertinent attitude seems like enough of a challenge – until she begins having visions.

Chance leads Tam and Corin into meeting, and Tam is swiftly pulled into Corin’s life of war and politics. While they are falling into forbidden love, they learn there is another player in the war: the dragons themselves. Seeking to break free of their slavery, the dragons intend to use Corin and Tam as their tools. And the dragons demand whatever it takes, without regard for love or life or loyalty.

When I picked up the book, I had just finished Roxane Gay’s An Untamed State (review coming next week), and I needed a bit of a breather. I was expecting a literary-but-light read with plenty of escapism (see: dragons).  Moth and Spark confounded those expectations, since it is, at heart, a novel about court intrigue, through the lens of an accelerated Elizabeth Bennet/Mr. Darcy relationship. Yes, there were a few dragons, but not as many as you’d think, given the description of the book. The long middle section, which takes place at court, is quite tense.

Essentially, there’s so much going that the action sometimes felt truncated, and opportunities to elaborate on the culture, customs, and history of the world Ms. Leonard created simply passed by. Much as I love a standalone book, particularly in SF/F, I think Moth and Spark could have been and perhaps should have been three books: one that followed Tam and Corin in parallel, ending with their meeting; one about the intrigues at court and in the capital city; and one in the world at war.

It’s this sense of missed richness that makes me think Anne Leonard is a writer to watch. The Tam/Corin relationship is drawn from Jane Austen, as Ms. Leonard takes care to point out (though, for my taste, Tam is so perfect that she’s often annoying; “impertinence” is not something a character needs to overcome). The court politics and factions had some Dune-like overtones. The setting was a nice mix of the medieval and Victorian periods, with a few Gothic touches. The fantasy elements of the novel owe debts to Anne McCaffrey’s Dragonriders of Pern series, Greek mythology, and Tolkien (just a bit). It’s an unusual writer who can draw so many disparate threads together, and that’s why I’m looking forward to Anne Leonard’s next book.

*I received a review copy of this book from the publisher in exchange for an honest review.