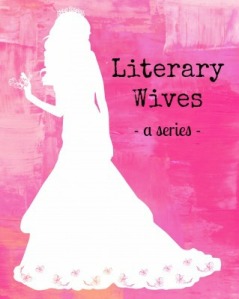 If you missed the Literary Wives introductory post, here’s the summary:  I’ll be joining bloggers Ariel, Audra, Cecilia, Kay, and Lynn  as we post every other month about a different book with the word “wife” in the title. When we read these books, we have two questions in mind:

1. What does this book say about wives or the experience of being a wife?

This month, we’re talking about Jeanne Kalogridis’s novel The Inquisitor’s Wife, which was published in 2013. We invite you to join the discussion by commenting on our blogs (links below) or posting your own review on our shiny new Facebook page, which you can find here.

Readers take note: Although I usually refrain from spoilers, what follows is a consideration of one aspect of the novel, and so I shall be spoiling away. Beware! 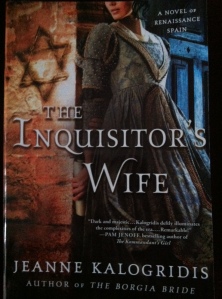 Here’s part of the Goodreads summary of The Inquisitor’s Wife:

In 1480 Seville, Marisol, a fearful young conversa (descendant of Spanish Jews forced to convert to Christianity), is ashamed of her Jewish blood. Forced into a sham marriage with a prosecutor for the new Inquisition, Marisol soon discovers that her childhood sweetheart, Antonio, has just returned to Seville and is also working for the inquisitors. When Marisol’s father is arrested and tortured during Spain’s first auto da fe, Marisol comes to value her Jewish heritage and vows to fight the Inquisition.

What I liked best about this novel: the period details (a family’s palace fallen on hard times, the bearing and sartorial choices of Isabella of Castile, the gruesome ritual of public penance) and its attempt to correct misconceptions about the Spanish Inquisition. Ms. Kalogridis focuses on the plight of conversos — those who converted to Catholicism from Judaism, as well as their descendants — in the city of Seville, and I liked the specificity of the city’s history and geography.

Contemporary scholarship suggests several different motivations behind the Inquisition, and Ms. Kalogridis comes down solidly on the side of Isabella’s desire to acquire the wealth and property of convicted conversos. It’s a convincing performance; Isabella is the most charismatic and dangerous character in the novel.

However, the book suffers when it comes to the “fiction” half of historical fiction. Marisol, the novel’s protagonist and narrator, is thoroughly unlikable, despite her family’s suffering. Now, I don’t mind an unlikable narrator or main character in the right circumstances (Gone Girl, for example, or Shakespeare’s Coriolanus), but we are supposed to empathize with Marisol, and for most of the book, it’s nearly impossible to do so. She’s sullen, selfish, and insensible to her mother’s feelings and heritage and her father’s delicate political position.

When she suddenly stops receiving letters from her childhood sweetheart and devoted fiance, Antonio, does she seek him out or ask her parents to find out what’s going on? No. She sends letters for months and then gives up on him. Clearly she hasn’t read enough novels. When her father subsequently arranges her marriage to their hulking, creepy (and stooge of the Inquisition) neighbor, Gabriel, Marisol doesn’t do what any self-respecting heroine would do (run away, or at least attempt escape) — she merely fumes in silence and refuses to kiss her father goodbye.

This sulky teenager performance is all the worse when we learn that Marisol’s mother is indeed a crypto-Jew, attempting to keep her faith alive after a horrific incident of savagery took her family from her when she was a young child. Marisol’s arranged marriage is obviously an attempt to protect her from the offices of the Inquisition, and the price for that protection turns out to be her father’s life, freely given in exchange for hers. Marisol only finds her courage (and accepts her heritage) when it’s much too late to save her father.

Instead, the novel closes with the revelation of Marisol’s mother’s identity a half-hearted resumption of Marisol’s romance with Antonio (who, obviously to the reader, if not to Marisol, has been working to subvert the Inquisition from within and never stopped loving her.).  I think I understand why Ms. Kalogridis chose to write the novel from the perspective of a conversa who must discover her own heritage, but the secondary characters — particularly Marisol’s mother and Mariam, her friend and servant — have far more interesting stories and perspectives.

And now on to our discussion questions:

1. What does this book say about wives or about the experience of being a wife?

The book considers the very specific position of wives in fifteenth-century Seville. Women are expected to be obedient to their fathers and husbands, accepting orders, chastisement, and arranged marriages without complaint. Even Marisol’s father, generally portrayed as sympathetic, does not hesitate to strike Marisol’s mother or command her to obey him.

A notable contrast with the wives of Seville is the queen, Isabella, who never appears with her husband in the novel. Powerful, wily, and ruthless, Isabella changes her outward appearance to conform to the expectations of her audience (rich adornment for a private court party, simple black with a crucifix for public occasions or audiences with monks). It’s politically useful for her to appear as a dutiful wife, and so she takes on that appearance — all the while remaining completely independent.

As Gabriel’s wife, Marisol expects to follow her mother’s example and submit to her husband’s wishes. Gabriel repulses her, not only because of his creepy fixation on her since childhood, but because he’s cruel and brutal (he beat a defenseless elderly man as a teenager, and as an adult he works for the Inquisition and shows no compunction about having people tortured — including Marisol, late in the book).

However, thanks to Gabriel’s brother’s machinations (and later, Gabriel’s apparent unfamiliarity with female anatomy), the marriage goes unconsummated. According to church doctrine, consummation is required to make the marriage complete; perhaps this is yet another reason why Marisol feels no loyalty to Gabriel. Conveniently, it also makes possible annulment and remarriage to Antonio feasible.

Still, because Marisol is Gabriel’s wife — and a conversa —  Gabriel manipulates her for his own political and personal purposes, and Marisol only thwarts him with subterfuge and help from Mariam. She is obliged by circumstance to fear Gabriel, even though she does not respect him.

Please visit the other Literary Wives bloggers to get their takes on the book!

Ariel at One Little Library

Cecilia at Only You

Lynn at Smoke and Mirrors

(Emily’s on hiatus for awhile.)

We’ll be reading The Zookeeper’s Wife next, so we hope you’ll stop by again for the next Literary Wives discussion on the first Monday in April.

10 thoughts on “Literary Wives: The Inquisitor’s Wife, by Jeanne Kalogridis”