It’s Hobbit time again, Charlie Brown. All across the interwebs, people are writing handy “Previously on The Hobbit” recap pieces in preparation for the next movie’s opening today. Here’s my humble contribution.

As a nine-year-old, I thought the narrator of Tolkien’s The Hobbit was talking down to me, and thus disliked the book immensely — so much, in fact, that I delayed reading The Lord of the Rings until I was seventeen. It didn’t help that I hated the narrator of the audiobook version, which I was obliged to listen to during one of our family road trips (perhaps this is the source of my dislike for the medium?). 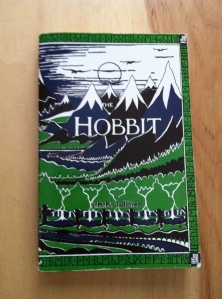 So, if you will, imagine my surprise when I picked up The Hobbit last year, before the movie came out, and found it charming, exciting, and full of respect for its intended audience. The narrator I once found condescending now seems conversational, inclusive, inviting. It’s a children’s book, yes, but the kind that an adult can read with enjoyment.  It’s like an amuse-bouche before the main courses — The Lord of the Rings and The Silmarillion.

Now, before I start in on the movie, let me disclose that I thoroughly enjoyed Peter Jackson’s Lord of the Rings trilogy, a view not shared by many die-hard Tolkien fans, I know. But I thought Mr. Jackson handled the necessary exigencies well. Sure, I could have done without the Elves at Helm’s Deep and the ill-contrived Aragorn-isn’t-ready-for-kingship plot line, and yes, I would have liked to see Tom Bombadil & Goldberry, and the Scouring of the Shire, but these are issues I can live with.

And before you ask, there were some positives to my Hobbit movie-going experience: I thought the casting of the major characters was spot-on, and I loved Howard Shore’s score. But alas, not enough for the movie to avoid my wrath.

Herewith I present, in no particular order, my objections to Mr. Jackson’s treatment of The Hobbit:

Three movies out of a 275-page book? That’s just turning a beloved story into a cash cow. I know I’m not the first to make this argument, but I think it needs to be out there. Yes, asking people to buy three movie tickets instead of two will increase your profits by one-third. But that’s not a good reason to expand a story so drastically. (Much as I wish I hadn’t, I saw a preview for the second installment that featured Legolas and an Elf played by Evangeline Lilly. Oh, PJ. Please. Creating characters out of whole cloth? Where do you and Fran Walsh and Philippa Boyens get the nerve? If you REALLY need a female character, turn Beorn in a woman. For serious. That would work better.) I get that filmmakers have to make tough choices about what to cut from beloved books in order to make a reasonable run-time, but adding material to a fully-realized Tolkien story is sheer hubris.

Perspective: The narrator of The Hobbit shadows Bilbo, for the most part. When Gandalf disappears, Bilbo doesn’t know what he’s up to until Gandalf shares information with him. In this way, Bilbo is placed in the position of a child, not always allowed access to the adult world, unless it’s through a gate-keeper. He’s on an important quest with the Dwarves, but it’s the grown-ups — Gandalf in particular — who will deal with The Necromancer (aka Sauron) who gains power in Mirkwood. Here’s what The Hobbit has to say on the subject:

[. . .]but every now and again he would open one eye, and listen, when a part of the story which he did not yet know came in.

It was in this way that he learned where Gandalf had been to, for he overheard the words of the wizard to Elrond. It appeared that Gandalf had been to a great council of the white wizards, masters of lore and good magic; and that they had at last driven the Necromancer from his dark hold in the South of Mirkwood. (266)

Yep, that’s pretty much it. If Tolkien thought a blow-by-blow of the Battle of Dol Guldur was necessary to elucidate the plot of The Hobbit, he could have included it. But he doesn’t. And apparently Mr. Jackson knows better: In the first Hobbit movie, we’re shown Gandalf deep in conversation with Elrond & Galadriel (and good old nefarious Saruman, nice to see you as always, Mr. Lee), and that’s just a taste of what’s to come. I understand that in some quarters, there are calls to get as much of Middle Earth on screen as possible. But guess what? There are other books for that!  Seriously, quit calling the movies The Hobbit: An Obvious Subtitle. Call them Money-Making Lord of the Rings Prequels.

Violence: The Hobbit is a children’s book that doesn’t gloss over difficult choices, the risk of death, or various fantastic dangers. However, there were a couple instances of gore (especially the beheading of Thorin’s father) that make the movie a no-go for kids 8-10. I know that they don’t belong to the coveted ticket-buying demographics, but you think Mr. Jackson could have flexed some muscle with the studios — or exercised some self-restraint — and toned it down a notch or two, so that Tolkien’s intended audience could be his audience, too. He lost a great opportunity to make a family film — and not in a schmaltzy (or cartoon) sense.

Radagast: Oh dear, where to begin. Radagast is, as anyone who’s read The Silmarillion can tell you, a Maiar, a being of divine origin though not one of, and less powerful than, the Valar. Like Gandalf, Radagast walks Middle Earth is the guise of an old man, but unlike Gandalf, his affinity is for flora and fauna, not Elves and Men and Hobbits. A little odd he may be, but the totally bizarre movements and costume Mr. Jackson gave him are a bridge too far. I was viscerally angry with this portrayal, which is in line with Mr. Jackson’s choice to turn Gimli into a buffoon to play for cheap laughs in LOTR. Mr. Jackson has departed from Tolkien’s nuanced, gentle laughter with the characters (and sometimes at their foibles) and created his own brand of cruel comedy that attacks Radagast. And the bird excrement (this is a blog for all readers, but you know what I’m saying) on his head? BAD FORM, Mr. Jackson.

An effects issue: While Gollum, played by the always-amazing Andy Serkis, was graced with the best CGI effects ever, Azog was just atrocious. Totally fake-looking.

And the cherry on top of my dislike sundae: my favorite musical section of the movie, which worked so well in the trailer, is the Dwarves’ song (not the over-long dishwashing one — the other one). And it’s cut off too soon! Gah!

Essentially, I think Mr. Jackson shows a significant lack of respect for his source material.

8 thoughts on “In Which I Eviscerate the First Hobbit Movie”