William Giraldi’s essay on Herman Melville-as-reader has been making the rounds on the web this week, appearing first in the LA Times and then elsewhere (Maria Popova tweeted about it; A Piece of Monologue ran it), including Salon, which is where I ran across it. 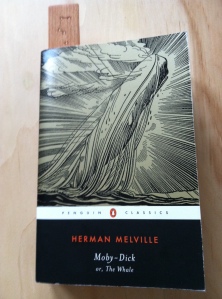 It’s a good piece, though I could do without the put-downs of genre fiction and some of the vitriol (Mr. Giraldi is known in literary circles for his excoriating review of two Alix Ohlin books. His point in this essay boils down to: The drivel that’s published these days flows from the keys of those who do not read (Mr. Giraldi’s closing line is “So put down your pen awhile. Pick up Moby Dick [sic].) Melville, like other great writers, stood on the shoulders of giants. In order to write well, one must read well, and often, and deeply. (I’d make the same argument about living well, but that’s for another time). He points to Milton, one of those authors Melville grapples with most intensely, and rightly so. Earlier this week, though, I was thinking about another kind of literacy, or literary awareness, as I read Chapter 9 of Moby-Dick (“The Sermon”).

Though I’m not a believer, I’m grateful for an elementary education that gave me familiarity with Bible stories and concepts. It’s incredibly helpful, in all kinds of contexts, to understand references to Judith and Holofernes, for example, or the wedding feast at Cana.

Or Jonah and the Whale. Without the background music of Biblical phrasing in mind, it would have been difficult for me to appreciate just how brilliant this chapter is. Father Mapple tailors his sermon for the sea-going folk and sea-watchers in his congregation, conjuring up the details of Jonah’s cabin (“a swinging lamp slightly oscillates in Jonah’s room” [50]) to make the text come alive. In embroidering an old tale to reach a new audience, he becomes a figure of the novelist. And when he ends his sermon, he’s shaken by his awesome responsibility.

Here’s a little gem from the sermon: “But oh! shipmates! on the starboard hand of every woe, there is a sure delight; and higher the top of that delight, than the bottom of the woe is deep” (54).

6 thoughts on “Musings on Moby-Dick, Part 2”