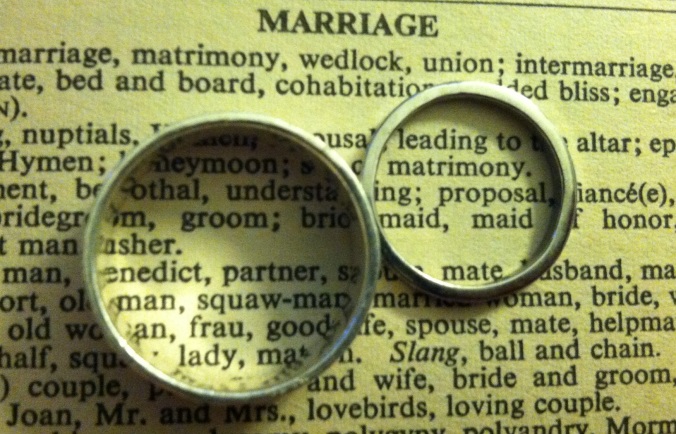 We were married three years ago this week, back in the olden days before Pinterest provided endless helpful suggestions regarding how to personalize your wedding with monograms and mason jars.

Now, I love a mason jar as much as the next gal, but our last name’s initial looks a heckuva lot like a circle, so I didn’t (and don’t) see much point in monogramming anything. I think it would have confused people. (“Which table are you sitting at?” “Table 0.” “Oh, I thought we were at table O.” “Oh dear.”) Personalizing one’s wedding ought to mean something more than splashing one’s initials all over it in in perfect wildflower hues, right?

Our wedding would never make the pages of Martha Stewart Weddings. We didn’t meticulously handcraft garlands of paper cranes from the pages of vintage books. We didn’t do favors, rice, confetti, a “real” wedding cake (we went with the Heart of Darkness chocolate torte, with mango coulis), or a “normal” ceremony.

What we did do was try very hard to make the wedding our own, an event that expressed not only who we are as a couple but where we came from — the people and words and music that shaped our lives.

The program included the line from “Birches” I’ve used in this post’s title, and Juliet’s immortal lines, “My bounty is as boundless as the sea / My love as deep. The more I give to thee / The more I have, for both are infinite.” The lettering on the front of the program used a font based on Jane Austen’s handwriting; on the last page we reprinted Shakespeare’s Sonnet 130 in memory of absent friends.

The processional was “Building the Barn” from Witness, because, well, just watch that part of the movie (bonus: Viggo Mortenson cameo!). And the recessional was “Everyone” by Van Morrison because, well, watch the end of The Royal Tenenbaums. But only if you’ve seen the beginning and the middle.

While guests waited they had the option of tinkering with a crossword we made about us, our friends, and families, or looking out over a little river and falls, or browsing in the bookstore.

[It’s lovely to be able to return to a place that holds such beautiful memories for us; we try to go back at least once a year. I’ll post pictures from our latest visit tomorrow.  I bet you’ll want to go there too.]

Our ceremony was comprised of the usual wedding bits, retooled to suit our beliefs and preferred wording, and literary readings. Each of us asked a parent, a sibling, a friend, and an aunt or uncle to read during the ceremony, in groups of two.

Which readings, you ask?

I can still hear each one of these people reading, people we love who shared these words that mean so much to us. Because a marriage ceremony is an act of speaking something into being, and it’s important to get the words right.

So, since today is Tuesday, and therefore a poetry day around these parts, I thought today I’d highlight a poem that wasn’t read at our wedding.

You read that right. We both love Robert Frost’s “Birches” — so much so that my husband’s wedding ring is etched to look like birch bark — but it is long, and not really related to marriage, so we chose a different Frost poem for our set of readings. Now, though, after three years and one child together, this poem has taken on even more significance to us. Sometimes I imagine my son as the boy in the poem, confident though solitary. Sometimes I turn to the poem when things get hard, as they are wont to do, when

I’d like to get away from earth awhile
And then come back to it and begin over.

But above all, we love the poem for its abiding love for the beauty and promise of this world and its often-anonymous inhabitants. After all, “one could do worse than be a swinger of birches.” 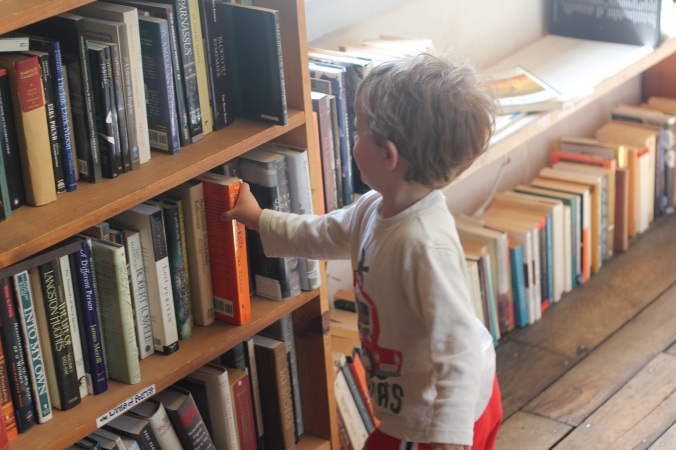 Three years later, at the Bookmill.

Did you incorporate readings into your wedding ceremony? How did you choose your readings?

15 thoughts on “A Literary Wedding, or, “Earth’s the right place for love: / I don’t know where it’s likely to go better.””