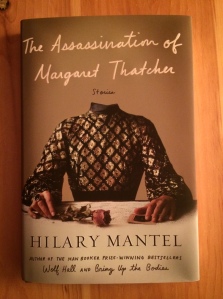 Yes, I’ll talk about the controversial title in a second, but let me say this first: at one point, I looked up from reading this book and said to my husband, “Hilary Mantel is unbelievably good.” One look at my face and he replied, “That good, huh?” Yes, that good.

Now, about the title story, which is the last story in the collection: it’s a good story, a fascinating premise. It does not depict the assassination of Margaret Thatcher, but the narration makes it clear that in the story’s alternate timeline, the assassination happened. The story is an examination of character, of history, of choices. The narrator, a woman who lives near an eye clinic where the Prime Minister has had surgery, lets in a man she thinks is a plumber, but who turns out to be an IRA operative. He holds her as a semi-willing hostage, and the pair discuss what he intends to do. It’s chilling and strange, and none to flattering toward Margaret Thatcher, who is still a divisive figure in the UK (Baroness Thatcher died last year), where the controversy over the story is much louder and nastier than it has been here (there have been Orwellian calls for Ms. Mantel’s imprisonment, for example). However, I imagine that if a similar story had been published here about Ronald Reagan so close to his death, the commentary would be just as deafening.

As a girl, I loved reading about Margaret Thatcher; I considered her a role model, since at the time I wanted to go into politics (also astrophysics—ah, the follies of junior high). Now, as an adult, I admire her in some respects, though I don’t think I’d find her domestic policies agreeable. What I’m trying to say is that I have no ill-will toward Margaret Thatcher, and my only objection to Ms. Mantel’s story is that though it depicts Margaret Thatcher as a public figure, not a private person, it should perhaps have been held back for another year or two in deference to Baroness Thatcher’s family’s mourning.

By the way, I do not know who chose the title for this collection of stories, but the cover suggests to me that the American publisher, in any case, is not at all alarmed by the prospect of controversy, and perhaps welcomes it.

Most stories in the collection have been previously published (the oldest, by publication, dates back to 1993, but most were published after 2000), and their contemporary settings will come as a surprise to anyone who is familiar with Ms. Mantel’s glorious rendering of Tudor England in the Booker Prize-winning novels Wolf Hall and Bring Up the Bodies. In “Sorry to Disturb” (which, incidentally, I think would have made a better title) a woman living in Saudi Arabia comes to regret allowing a stranger in to use the phone, which leads to an increasingly awkward series of social encounters. Another story, “Comma,” finds a young girl and her slightly older friend sneaking around an invalid’s house; rarely have I found a child-narrator so interesting.

“How Shall I Know You?” finds an author on a dispiriting stop of her book tour, alternately loathing and pitying the people around her. The last line of the story took my breath away; was a good story up to that point, but the last line made it blossom into something magnificent.

Other characters in The Assassination of Margaret Thatcher* include a girl watching her sister slowly die from anorexia, a philandering husband, a traveler on a train who sees her father’s ghost, and couple on holiday who leave too much unsaid.

These stories are often grim, often chilly, and often funny. The characters tend toward the grotesque, but reveal just as much about the reader as they do about themselves.

And oh lord, the language. Ms. Mantel’s images are detailed, strange, perfect. A girl’s twisted hair ribbon makes “her head [look] like a badly tied parcel” (40); table linen is fringed “like the ears of a teddy bear” (25); “big eyes—unripe fruits–were bulgy with incomprehension” (107). In context, they can be eerie, or funny, but they’re always illuminating.

Hilary Mantel is an absolute wonder. If you like short stories and exquisite writing, don’t miss this book.

My husband, bless him, knows very well that the presents I like best are books. For my birthday the first year we were married, he picked out Hilary Mantel’s Wolf Hall, and for my first Mother’s Day, it was Bring Up the Bodies, the sequel. Forget brunch and overpriced flowers: I’m all about Cromwell and Anne Boleyn.  As a bonus, he gave me enough time away from my beloved son to devour the book in two sittings.

Since it appears I’ll be waiting a while for the third installment, my last birthday brought with it A Place of Greater Safety (very long, and to be embarked upon when my beloved son decides to sleep through the night and past 5:00a.m.) and Fludd. [And the new biography of Leonard Cohen, which I can’t wait to get to, and The Song of Achilles, so good I read it twice, and a few other gems.]

Fludd is a slim volume (under 200 pages), with a cover design I can’t quite get behind, but it’s a gem of a novel. Ms. Mantel regards her characters with an unsentimental but ever-interested eye, transforming, like her creation Fludd, the frustrated men and women of cold and grimy (and fictional) Fetherhoughton in subtle and not-so subtle ways. Ms. Mantel’s mordant but quiet wit suffuses the novel, which I highly recommend.