A couple of years ago, I had the pleasure of reading Helen Oyeyemi’s work for the first time (review of Boy, Snow, Bird here; interview with Ms. Oyeyemi here), and I’m delighted to report that What Is Not Yours Is Not Yours*, a collection of stories, is just as intriguing.

These nine stories (with titles like “Is Your Blood As Red As This?”  and “Presence” and “Dornička and the St. Martin’s Day Goose”) are billed as linked. And they are linked thematically, through a key and lock motif, and through their focus on characters’ secrets. However, as I read the first half of the book, I think I spent a bit too much time searching for connections between each story (primarily character and location); by the time I sat down to read the second half, I’d relaxed into the book’s thematic concerns. On the short story collection-connectedness spectrum (which I just made up), it’s closer to Rebecca Makkai’s Music for Wartime than, say, The Tsar of Love and Techno (Anthony Marra).

I loved these stories’ elegant strangeness, the feeling they gave me that I was not on firm ground, but instead racing to suss out the boundaries—or lack of boundaries—in Ms. Oyeyemi’s worlds. In stories like the aforementioned “Dornička and the St. Martin’s Day Goose” and “Drownings,” readers are set down in the world of a fable or fairytale, though closer to their grim origins than the sanitized cartoon versions of childhood. In “‘Sorry’ Doesn’t Sweeten Her Tea,” a teenage girl, incensed with her favorite pop star’s non-apology to a woman he’s beaten, enlists the help of a friend of her stepfather’s—and the goddess Hecate—to bring him to justice (the story is, among other things, a brilliant exploration of online and real-life bullying).

There’s a story about puppets, including one so real that s/he is mistaken for human; a story of a secret garden and the abandoned but not unloved women who might hold its key; a story of a land ruled by a tyrant whose drowned victims live in an underwater city; a story in which an unlikely sorority (The Homely Wench Society) conducts a raid on a rival fraternity in which they swap books (this last story is so charmingly, queerly British that I found myself grinning from ear to ear at the end). There’s a hotel (where “the furnishings are a mixture of dark reds and deep purples. Moving through the lobby is like crushing grapes and plums and being bathed in the resultant wine”) whose guests, once checked in, can never leave (though they can ask almost anything of the management). There’s a pair of therapists who choose themselves as test subjects for an experiment that shows them what might have happened in their lives.

This NPR profile (from 2014, when Boy, Snow, Bird was published) is wonderful, and I think does a better job than I am doing right now of conveying the “jolly gruesomeness” of Ms. Oyeyemi’s writing. In it, she talks about finding something about Eastern Europe that meshes with her outlook, and you can see in this collection that her travels in that part of the world have born fantastical fruit.

The writing in these pages is full of inventive detail, and it’s also supple; each story brings a shift in tone, from cheerful to suspenseful and back again. Always there’s the kind of tension that fully engages my attention, as here:

She sketched with an effort that strained every limb. Montse saw that the Señora sometimes grew short of breath though she’d hardly stirred. A consequence of snatching images out of the air—the air took something back.

One imagines that Ms. Oyeyemi is often breathless.

Yesterday I reviewed Helen Oyeyemi’s marvelous (in every sense of the word) new novel, Boy, Snow, Bird. Ms. Oyeyemi graciously agreed to be interviewed via email.

How would you describe the inception of Boy, Snow, Bird? What was the writing process like? 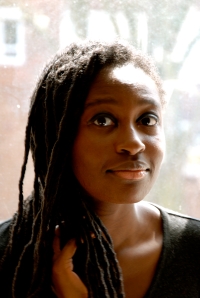 HO: the idea of writing a wicked stepmother story had been in my mind ever since i’d read Barbara Comyns’ novel, The Juniper Tree, which is a retelling of the fairy tale of the same title from the perspective of the wicked stepmother (poor, poor woman – i mean the wicked stepmother, not Comyns…Comyns’ narrative voice is so wonderfully eldritch, a mix of light and grit in proportions that only she can master.) it took me some time to get into Boy’s voice – perhaps i was worried about the difficulties she was going to have in terms of trying not to do harm when she’d been harmed herself.

Much of the novel takes place in a small town in Massachusetts. Was there a particular reason for this choice? Did you visit the area to get a sense of the landscape, or conduct other kinds of research for the novel?

HO: i have a dear friend who lives in boston; we drove up to worcester after i’d finished writing the book so i could see how completely imaginary the small town near worcester in my book is. massachusetts is linked to emily dickinson and louisa may alcott in my mind, so i think of it as a place where my kind of woman can flourish: a good place to send Boy to, i think. 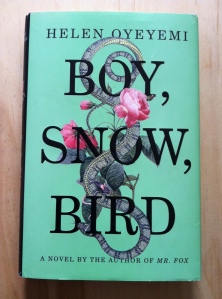 Boy, Snow, Bird is in part an adaptation of the Snow White fairy tale. Did other contemporary retellings of folktales and fairy stories inform your writing?

HO: Anne Sexton’s take on Snow White, in her collection, Transformations, affected the way that i read snow white – that image at the end of the poem, the wicked queen dancing herself to death in red hot shoes. for me Anne Sexton’s retelling exposes a notion that’s woven into the story: where there are two beautiful women, one must pay a price – a price for both women’s beauty, perhaps. most of the characters in my own retelling are wise to this notion, and don’t accept it.

Boy, Snow, Bird confronts — always with grace — difficult issues of race, gender, family, and aesthetics. What’s one question you hope readers ask as they come away from the novel?

HO: i hope a reader leaves the story wondering how to get better at seeing other people, or at least seeing through our own halls of mirrors.

As readers may know, you’re a prolific writer, with five novels and two plays to your credit already. What’s next on your writing horizon?

HO: o dear…your guess is as good as mine. but i’m looking forward to it, whatever it is.

My thanks again to Ms. Oyeyemi for her time and her thoughtful answers.

Boy Novak flees both home (New York City) and her abusive father for life in small-town Massachusetts. Drifting from job to job, and occasionally frightened by her own strangeness (“It wasn’t that I didn’t want to speak; it just seemed smarter not to. All of a sudden it felt as if I had far too many teeth, more teeth than it was decent to show” [45.]), Boy eventually settles down with a former professor (now jeweler) Arturo Whitman and his beautiful, enchanting daughter, Snow. However, when Boy’s daughter, Bird, is born, a secret is revealed that leads Boy to send Snow away when “Snow’s daintiness grew day by day, to menacing proportions” (142). Boy becomes a wicked stepmother in absentia.

Time passes, however, and Snow and Bird prove themselves determined to reunite, to find out the whole truth (Bird is a budding journalist) — because there’s another woman missing from their story.

I loved Boy, Snow, Bird. The characters’ voices are distinct, witty, and smart, and the reworking of the Snow White fairytale surprised me at nearly every turn. While it deploys the same tactic that makes C.S. Lewis’s Til We Have Faces so brutally brilliant — that is, telling an established myth from the point of view of the “evil” character — Boy, Snow, Bird is even more expertly layered. The veneer of magic both conceals and reveals our own preoccupations with perception and the practice of looking.

Reviewers and readers have, justifiably, focused on the novel’s engagement with race (Ron Charles in the Washington Post has a particularly good paragraph about it, which you can read here). I’d also like to point out that the novel consistently reminds us of what it’s like to be a woman, and therefore constantly looked at (by others and by yourself). One of Boy’s teenage friends from the bookstore where Boy works, a girl named Sidonie, is catcalled every day on her way home from school (disturbingly, street harassment hasn’t changed much from the book’s 1953 setting); one of the ways that Snow is initially marked as “young for her age” is that “she hadn’t yet learned to smile even when she didn’t feel like it” (71). She hasn’t learned, in other words, the right face to show the world that’s looking at her.

And then there’s the lead up to a terrifying episode of abuse that Boy’s father, a rat catcher, perpetrates. Two weeks before her escape, Boy walks home with her boyfriend of sorts. Boy’s father greets them at the door: “‘I’ve seen the way you look at my daughter. You think she’s pretty, don’t you?'” Then:

They both turned to me and went on a looking spree. I left them to it and wished I could sail over their heads and into the acid blue sky. They didn’t look for long, it was more a practiced series of glances; they knew what they were looking for and seemed to find it. It was a wonder there was anything left by the time they were through looking. (120)

After the rat catcher (as Boy thinks of him) threatens to mar Boy’s beauty, to scar her badly enough that only a “true love” could accept her, Boy comes to the conclusion that “no matter what anybody else said or did my father saw something revolting in me, and sooner or later he meant to make everyone else agree with him” (123). Is it any wonder that Boy fears the face that looks back at her from the mirror, the face that sometimes isn’t hers?

It’s in articulating the tension between the fear of beauty and the craving for it that Ms. Oyeyemi truly shines.

*My thanks to the Riverhead Books for sending me a copy of this novel in exchange for an honest review.